Smash Summit 14 preview: The race for second place is on - Upcomer

Smash Summit 14 preview: The race for second place is on 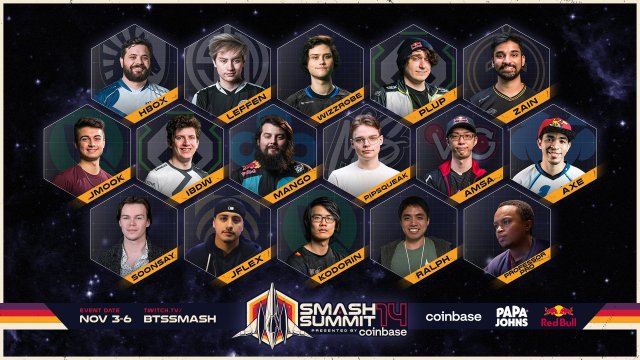 Provided by @BTSsmash via Twitter Nearly all of the players at this event are currently ranked top 50 in the world.

Beyond the Summit’s iconic Super Smash Bros. Melee invitational series is returning to Los Angeles, California, this weekend with one of its most stacked line-ups to date. Every player in attendance is either currently ranked in the top 50 or is a legitimate contender to reach the top 50 by the end of the year.

With his victory at the Ludwig Smash Invitational, Zain “Zain” Naghmi all but secured his position as the No. 1 Melee player in the world. However, there’s still room for plenty of change in the ranks just below him. Here are the storylines to look out for at Smash Summit 14 this weekend.

All sixteen players. Together. Heading into the cosmos. 💫

Catch all of these players at #SmashSummit 14 Presented by @coinbase, kicking off November 3rd! 🚀 pic.twitter.com/nlkFUSGole

The race for second place

Smash Summit 14 will feature all eight of the players who have made it to grand finals of a major this year. Of that group, only two have yet to finish in first place: Jake “Jmook” DiRado and Justin “Plup” McGrath. Jmook in particular has the most to gain by winning this tournament; despite his consistency, Jmook’s inability to win a major prior to now is perhaps the biggest stain on his resume.

Meanwhile, Ludwig Smash Invitational runner-up Juan “Hungrybox” DeBiedma is the current frontrunner for the No. 2 spot on the year-end rankings. Barring a loss to Kalindi “KJH” Henderson at CEO in June, Hungrybox has avoided losses to sub-top 20 players while consistently challenging players in the same tier as him. A victory at this event would further bolster his chances of finishing the year ranked just behind Zain.

In addition, viewers ought not count out Cody “iBDW” Schwab, who won the previous two Melee Summits. Despite his inconsistency in the first half of the year, iBDW has only dropped sets to fellow top eight players at his last four tournaments. With three large tournament wins already under his belt this year, iBDW could easily add a fourth at Smash Summit 14.

Other players to watch at Smash Summit 14

Given his inactivity in the first half of the year, it’s still too early to call where Justin “Wizzrobe” Hallet will land on the year-end rankings. He is 1-2 against Masaya “aMSa” Chikamoto for the year, but otherwise has no wins against the top eight. He’s also 1-1 against Juan “Medz” Garcia, but doesn’t have any other losses outside of the top eight. While a first-place finish seems unlikely, Smash Summit 14 could help Wizzrobe secure a spot in the top 10.

Despite being the prospective last seed, Ralph “Ralph” Arroyo could secure some upsets at this event. At locals and regionals this year, he has conquered the likes of Zac “SFAT” Cordoni and Zaid “Spark” Ali. As a result, Ralph could threaten opponents like Aaron “Professor Pro” Thomas, Jacob “Jflex” Pinto and more.