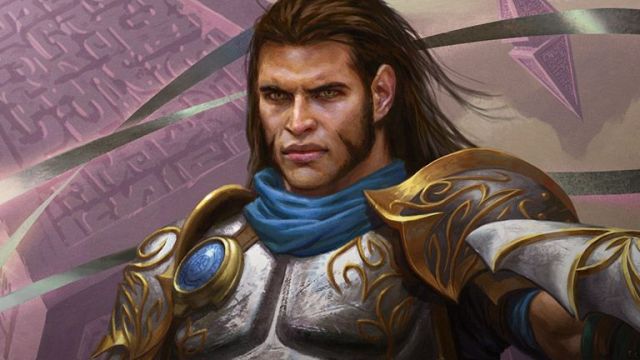 A brand new signature spellbook is set to release alongside Magic: The Gathering‘s new War of the Spark expansion. This new edition is centered around the popular Planeswalker, Gideon Jura! Like previous spellbook sets, all of the cards featured are reprints of popular cards meant to embody the character of the Planeswalker. New art and borders help to tell the story of Gideon and the life he lived in the Magic: The Gathering universe. These eight cards mix flavor and function quite well, so let’s jump into them!

The original Gideon Jura Planeswalker card was a natural choice for the set, showing off the legendary hero himself with his iconic original art. The card’s abilities showcase the hero’s battle-hardened prowess, indestructibility, and willingness to protect others.

Martyr’s Bond is a commander card often used to punish opponents for destroying your permanents. In this case, it instead portrays Gideon’s self-sacrifice in the fight against Nicol Bolas.

Path to Exile is one of the most played cards in Modern, so its reprint here is always welcome to add value to the set. The chosen scene of Gideon killing Demonlord Belzenlok is a bit odd since it was only briefly mentioned in the Dominaria storyline, but it looks nice either way.

Rest in Peace is a fantastic reprint of one of the best graveyard hate spells of all time. Even with the recent printing of the card in Masters 25, the card is still over $10. With this new printing, the card should become slightly more accessible for budget players needing to flesh out their sideboards beyond the cheap Tormod’s Crypt. The pictured monument on Theros hints at Gideon’s final fate and resting place.

Shielded by Faith is a simple aura that grants indestructible to a creature. It is a fine commander card for “Voltron” strategies, or if you just like the flavor of Gideon protecting your creatures.

Speaking of commander cards, True Conviction is a fantastic way to turn a board of innocuous tokens into a massive threat. Many players will prefer the original Scars of Mirrodin art and quote, but Gideon fans are sure to love the redesign.

Worship is a classic card that creatures decks have used since Urza’s Saga. Decks without enchantment removal are known to lose to it on the spot, so don’t be afraid to try this enchantment in Modern or Commander. The new art pays homage to Gideon and his time spent on Amonkhet.

Blackblade Reforged is the sword Gideon used to kill Demonlord Belzenlok and the one he wields against Nicol Bolas. The card itself features fantastic art by Richard Kane Ferguson, calling back to the original Blackblade cards, Dakkon Blackblade and Korlash, Heir to Blackblade.

This signature spellbook set is an excellent representation of an iconic Planeswalker. The new art and borders provide a fresh look for the cards while representing Gideon well. The value is also there, with excellent reprints in Path to Exile and Rest in Peace helping you to get your money’s worth.

Overall, it’s definitely worth the buy for any real fan of Gideon Jura, a legend in the history of Magic: The Gathering.