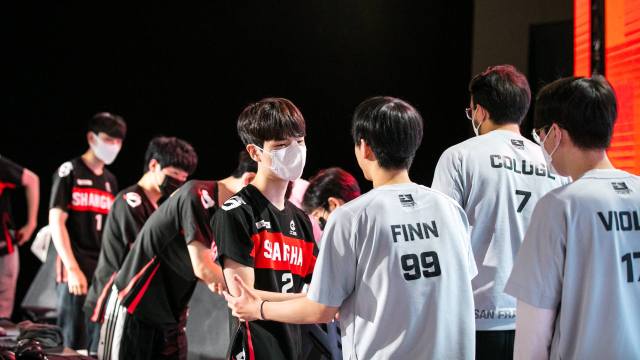 Provided by Activision-Blizzard. The Shanghai Dragons shake hands with the San Francisco Shock after their elimination from the 2022 playoffs.

In one of the biggest upsets so far in the Overwatch League 2022 season playoffs, the Shanghai Dragons were eliminated in the first wave of eliminations from the lower bracket. After getting swept by the Hangzhou Spark to get sent to the lower bracket, they lost 3-1 to the San Francisco Shock. After remaining among the top teams in the league after winning the championship in 2021, they won a total of one map in the 2022 postseason. Also, the Philadelphia Fusion, Toronto Defiant and Atlanta Reign lost in the lower bracket, ending their season.

Shoutout to the @Fusion, @ShanghaiDragons, @ATLReign, and @TorontoDefiant for all their hard work this season! Their #OWLGrandFinals journey ends here, but we can't wait to see them come back stronger next year! 🧡 pic.twitter.com/sbjPggxETS

In the Kiriko meta for the 2022 postseason, it was safe to say that the Hangzhou Spark proved themselves quickly as a team to fear. In the second playoff match, the Shanghai Dragons faced off against the Hangzhou Spark. Everything — from league standings to previous tournaments — said that the Dragons would win. However, one of the best surprise stories in recent years ended up leading the Spark to victory. Former Vancouver Titans DPS player Kim “Teru” Min-gi joined the Spark as a support player in September; he ended up as the main Kiriko player for the Spark and helping lead the team. Alongside carry moments from their DPS players of Zheng “shy” Yangjie and Kim “AlphaYi” Jun, the team swept the former champions.

A tough loss, to be sure; but they had another chance in the lower bracket. However, they had a formidable opponent, as the Houston Outlaws sent the San Francisco Shock to face them after beating them 3-2. The Shanghai Dragons had moments, like Lee “LIP” Jae-won popping off and a Lee “LeeJaeGon” Jae-gon sneaky back cap. Yet, the Shock proved too much, as the Dragons lost 3-1. While against tough opposition, the Dragons won the same amount of maps as the Reign and Fusion and won one less map than the Defiant did.

What now for the playoffs

With a big team out of contention for the title, teams like the London Spitfire and Hanghzou Spark are the underdog runs. The Spitfire remain in the upper bracket after sending the Los Angeles Gladiators down, while the Spark continue from the lower bracket.

When it comes to top teams, the Dallas Fuel and Seoul Dynasty remain the favorites, fighting in the upper bracket. We’ll have to wait and see which two teams go home next. The next lower bracket matches starting at 5:30 EST on Nov. 2.