It's no "Hallucination" this spoil match just got interesting. 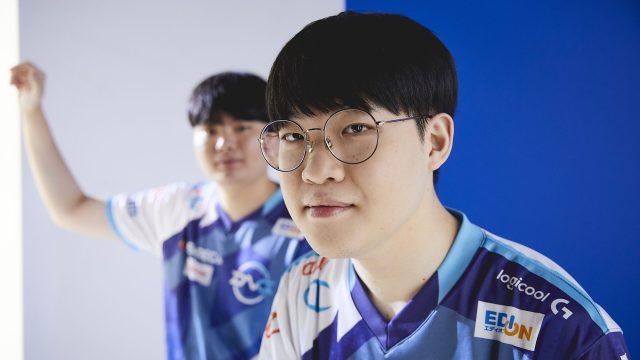 Provided by Riot Games/Getty Images Steal shows off his pocket pick at Worlds 2021.

While Day 4 of the 2021 League of Legends World Championship brought a three-way tiebreaker with a bunch of intense games and storylines, Day 5 was the exact opposite, offering almost nothing in terms of excitement after the second game. After the first round robin, DetonatioN FocusMe and 100 Theives were both on the brink of elimination. Each team lost their first match of the day against Edward Gaming and T1 respectively, and from then on, everything was set other than seeding.

The last two games of the day essentially became spoiler matches, with DFM up against T1 and 100T vs. EDG. If one of the underdogs stole a win, they would upset the final score and set the seeding without a tiebreaker needed. That’s when DFM decided to truly come online and spice things up, picking the patented Shaco for Mun “Steal” Geon-yeong for the champions first appearance at Worlds 2021. Steal has four of the six Shaco games played this year out of all regions across the globe, winning all four of them with a kill/death/assist ratio of 11.8. His proficiency on the champ was a bit overwhelming, so much so that it even drew bans in the League of Legends Japan League.

DFM made it out of the Play-In Stage earlier this event for the first time in the region’s history without utilizing their jungler’s pocket pick. But in their final game, Steal pulled it out to give fans a bit of excitement in an otherwise straightforward and telegraphed match. They weren’t able to pull off the upset in the long run, but the pick — along with an incredible first blood solo kill by Lee “Aria” Ga-eul — provided a burst of excitement in a snoozefest of a day.

Stay tuned for Day 6 and Day 7 this weekend as the final four teams are confirmed for the Knockout Stage, and to see if Shaco makes another appearance at Worlds 2021. Fans can catch all the action on lolesports.com.