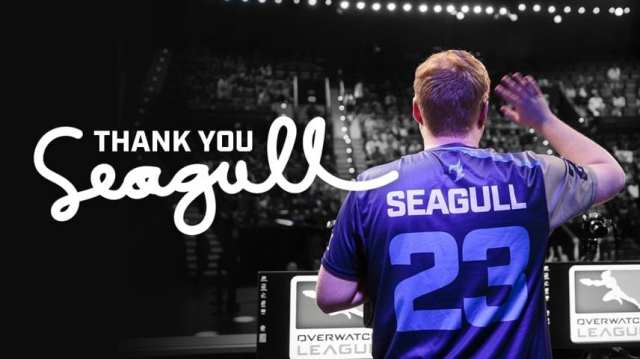 Brandon “Seagull” Larned confirms that he will be stepping away from the Dallas Fuel and retiring competitive Overwatch play indefinitely. Instead, he will be focusing his efforts towards his streaming career and community.

I am no longer a professional OW player.

The Dallas Fuel would also release a statement on his retirement, with head coach Aaron “Aero” Atkins saying:

The versatility, at a high level of skill, that Seagull brought to the Dallas Fuel this season is a model that all up-and-coming Overwatch players can learn from. His aptitude for the game is one of the best ever seen in Overwatch and he was a key leader both in and out of game for the Fuel. I wish him the best in his future endeavors.

Seagull was already a popular streamer and player of Overwatch when he joined Team Envy in 2017. His Twitch viewership currently stands at 761,000 followers. His fanbase and streaming popularity was a huge boon for him to get to the competitive level.  He would compete professionally in Overwatch when the Dallas Fuel would sign the entire Team Envy roster in the first season of the Overwatch League.

Unfortunately, the Dallas Fuel would not perform too well for most of the inaugural season of the Overwatch League. The Fuel would consistently finish as a bottom three team for the first three stages of the season. However, the fourth stage of the season would bring a much improved Dallas Fuel. They would revamp their coaching staff with the addition of Aero and with their diverse, talented roster, they were able to finish in fourth place.

Seagull on his retirement

Seagull actually spoke on the topic of his retirement quite extensively on his stream. He would state that he had to sacrifice a lot to become a pro player and that it was taking a toll on him. For example, in the time he went pro, he gained 40 pounds, developed sleep apnea, and could not sleep. He also mentions how he felt bad that he left his viewers and fans on Twitch, which was the biggest influence on his road to becoming a professional Overwatch player. Seagull says that he would try to convince himself that he would be able to compete professionally while streaming on the side. However, this was not the case.

In fact, he would come very close to going live, but because he felt so exhausted by ten hour practice days, he would not go through with it. He would go on to say that he did not want to let down his Twitch viewers and the thousands of people who used to tune into his stream with horrible gameplay. On the other hand, he also did not want to let down his teammates, whom he referred to as his “second family”. This is because if he tried to balance his streaming and pro-life, it would affect his practice and sleep, which would be a detriment to his gameplay on stage. As he put it, “there was no winning”.

The Effect of Playing Professionally

This is not the first time that pro play has affected the mental and physical health of a player. Former Dallas Fuel teammate and star DPS player Hwang “EFFECT” Hyeon also took a prolonged break from pro play. He too was feeling like the constant pressure of professional play was negatively impacting his mental health. He has not returned to the active roster, but there are rumors that he may come back this next season.

The New York Excelsior’s star DPS player Kim “Pine” Do-hyeon was also affected by professional play. Big Boss Pine would take an extended leave of absence after winning the Stage Two title, stating that he was feeling depressed and stressed.

This problem spans all of esports, not just the Overwatch League. Multiple players across multiple games, such as League of Legends and Counter Strike, have taken breaks for their mental health. This introduces a new issue that must be addressed: how will esports organizations help maintain the mental and physical health of their players? We will have to watch in the next few months.

What do you think of Seagull’s retirement, and the effect of professional life on players? Let us know your thoughts in the comments below! If you want more Overwatch content, check us out here!