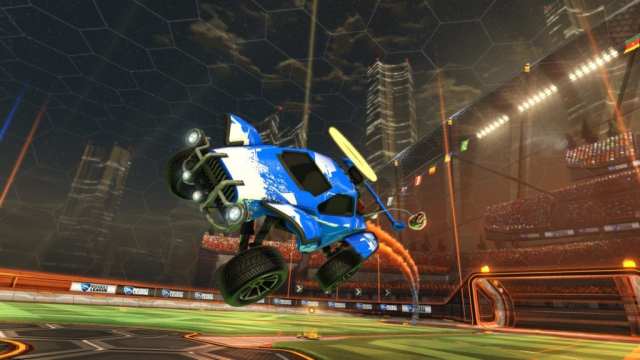 Kyle “Scrub Killa” Robertson has crowned himself the champion of the Mannfield Night 5K. Despite facing his kryptonite (and teammate) Victor “Fairy Peak” Locquet in the grand final, Scrub managed to take the win and the right to call himself the best 1v1 Rocket League player in Europe. Don’t let the knowledge of this outcome discourage you from going back and watching it all, though. There were eight competitors playing in a round robin league system and every match was pure eye candy. You can catch all of them over on John “JohnnyBoi_i” MacDonald’s YouTube channel.

Even though Fairy went fully unbeaten at 7-0 and secured first place in the league play section of the tournament, Scrub was close behind. It even looked like Scrub was heading for a 6-1 record, having lost only to Fairy until the very last day of the league. That’s when Hrant “Flakes” Yakoub woke up. Going down 2-0 against Scrub straight away, Flakes was already condemned to finishing in last place. But Flakes wouldn’t give up so easily and reverse swept Scrub in impressive fashion: 2-3.

But even with a 5-2 series record, Scrub had secured second place in the league with a win/loss ratio of 18-12, or +6. Compare this to Fairy Peak’s staggering +19 (21-2) ratio and it shows why fans considered him to be the heavy favorite in the MN5K. Scrub had done well, but he was not invincible, that much was clear.

As second-place finisher, Scrub needed just two best-of-7 series wins to crown himself the winner of the MN5K. With the excellent gauntlet system, he could sit back and see who he would end up facing for a spot in the grand final against Fairy Peak: Marten “Oscillon” van Zee, the third-place finisher, or whoever might defeat him coming from the round below.

In the end, it was Oscillon who ended Dylan “eekso” Pickering’s tournament in a 4-2 win and went on to face Scrub. This semi-final proved to be one of the best series of the entire tournament. Both Scrub’s and Oscillon’s goalkeeping abilities were immense, to say the least, but ultimately it was Scrub who won four games in a row after going down 0-2 in the series. This then meant a rematch against his teammate and tournament-favorite Fairy Peak, who had beaten him 3-1 in the league back in December.

Facing up against Fairy Peak, not many would have put their money on Scrub Killa. But Fairy struggled with Scrub’s pressure and speed. Scrub completely demolished Fairy in his first game, putting Fairy on his back foot. It’s telling that Fairy still managed to pull it back afterward, as the Frenchman won the following two on a day where he wasn’t quite as on-point as usual. Of course, in perfect fashion, the series went all the way to game seven and remained tense as ever until the final minute. But Scrub’s perfect control and composure allowed him to close out the game and claim the first-ever MN5K title.

It was a great series with a masterclass of 1v1 play and great casting by Johnnyboi. Be sure to check out all of our coverage of the tournament and stay tuned for more Rocket League action!

Want to see more Rocket League 1v1 esports? Sound off in the comments!