Rogue's Larssen gives thoughts on the season after Worlds 2022 exit

Bittersweet end to Rogue's and Larssen's best year ever. 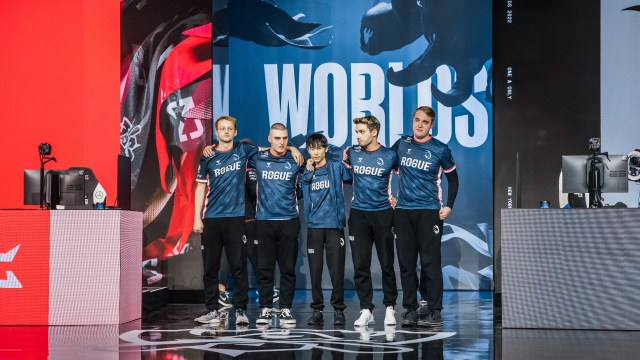 JD Gaming eliminated Rogue — and the mid laner, Emil “Larssen” Larsson, from League of Legends Worlds 2022 contention in 3-0 fashion on Thursday. It was the result everyone expected. But Rogue just being here in the first place is something no one expected at the beggining of 2022. All year, Rogue has continued to defy the odds in what has been without a doubt, the organization’s best year yet; according to Larssen, it has also been his.

“It has been the most memorable year of my League career by far,” Larssen said. “I’ll remember this year overall as way more enjoyable than the other years.”

Worlds 2022 has been Rogue’s and Larssen’s best result in history as both the mid-laner and the organization made it out of the group stage for the first time ever. However, even though Larssen considers Worlds 2022 a success, he doesn’t have a particular moment that he finds memorable. Instead, all he can think of are regrets.

🙁 never been this sad to go out of a tournament.. shit way to end an otherwise incredible year from me and my team. i love everyone in this team and especially thanks to everyone who believed in us during the year. Gg

“I wish our mentality was better after we qualified for quarters,” Larssen said. “Those games, we were not mentally completely in it.”

Those games put Rogue in this position to begin with. With the second seed in Group C instead of the first seed, they drew one of the Worlds 2022 favorites in JDG in the quarterfinals. The team was clearly outclassed; they stayed competitive, especially in Game 3, but the writing was on the wall. Larssen thinks that the team could have pulled off the upset if they were just a little better.

“We lacked on fundamentals,” Larssen said. “I think we could of taken some games or maybe the series, it’s kind of our fault; but obviously, they were just way better.”

Our time at Worlds has come to an end. We fought with a competitive spirit and desire for victory until the very end. Thank you to all our fans for your support. GG @JDGaming. #gorogue pic.twitter.com/TYCFfpdQjZ

When reflecting on the year overall, Larssen said that there is plenty to be proud of when it came to Rogue’s journey to Worlds 2022. To say that this year was perfect for Larssen or the team would be a lie. They’ve fought through some hardships but those seem to be what made the year so special. Rogue throughout the year has been counted out too many times to well…count. Even when the team entered the League European Championship spring playoffs as the one seed, they went down 2-0 against Fnatic in the semifinals before roaring all the way back to take the series. It was that moment that really started Larssen’s and Rogue’s magical year.

Then came the LEC Summer split. The team struggled at times, but after squeaking into the playoffs, the team came alive and the rest is history. The team managed to win the split and earn the title of LEC champions entering worlds in a series that Larssen will never forget.

“People thought we would barely make playoffs, but then we made finals — and won,” Larssen said. “The LEC finals win in my home country of Sweden, that and the [Fnatic win in spring] will be what I remember the most.”

Of course, he didn’t leave his teammates out to dry; Larssen stated that his teammates and supporting staff were what made this year so fun for him. The future is unknown, as the offseason is always crazy in every region but no matter what happens, he will keep this year close to his heart.

“I’m just sad, we had a very special team and we couldn’t go further,” Larssen said “I didn’t want the year to end because I love all my teammates a lot.”