100 Thieves and CTBC Flying Oyster have been eliminated 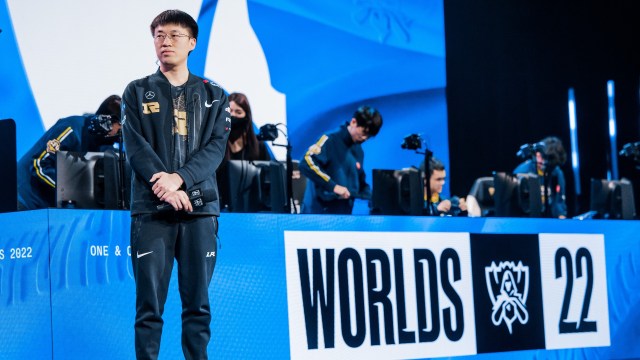 With 100 Thieves’ loss to Royal Never Give Up on the last day of the League of Legends Worlds 2022 group stage, the third and final North American team has officially been eliminated from championship contention. The loss puts 100 Thieves at four losses and, since RNG and the League Champions Korea champions Gen.G can only have three losses, both have clinched their spots in the quarter-finals.

After their loss against RNG, @100T_Esports are eliminated from #Worlds2022 Quarterfinal contention. pic.twitter.com/7BPxbKgQzO

Like the rest of the North American teams, 100 Thieves dug a hole too big to get out of. Their 0-3 Week 1 meant the team likely had to go 3-0 in Week 2 to have any shot of getting out of the group. The team obviously looked much better in Week 2 with a dominating win over CTBC Flying Oyster but one win was not nearly enough to get them into the knockout stage. After their loss to RNG their tournament run is now over.

RNG, on the other hand, were all but guaranteed a spot in the knockout stage after their fantastic Week 1 that saw the League Pro League fourth seed go 3-0 with wins on everyone in the group including the Worlds 2022 favorites, Gen.G. Despite the entire team contracting Covid-19 and having to play remotely, RNG powered through to defeat 100 and clinch their spot in the knockout stage.

CFO were eliminated after their loss to Gen.G which also closed off the potential for a three-way tie for second place which meant 100’s only chance to get out of the group would be going 3-0. That scenario is obviously not viable anymore either.

As for Gen.G, they had a so-so Week 1 that saw them drop a game to RNG. But with a record of 2-1, their spot in the quarterfinals was likely coming into Week 2. Even before the team’s second game of the double round robin, they have found themselves at enough wins already to clinch their spot. This year three wins is enough.

But for the rest of Group D, there are games still to be played. RNG and Gen.G have locked in spots in the quarterfinals but seeding is still in play. If Gen.G can still manage to grab the one seed from Group D as long as the team defeats RNG to force a potential tiebreaker. To get the one seed outright Gen.G will have to beat RNG and 100 while they hope RNG loses at the hands of CFO. RNG can clinch the one seed with just a win over Gen.G.