Can RNG repeat their success from the 2021 Mid-Season Invitational? 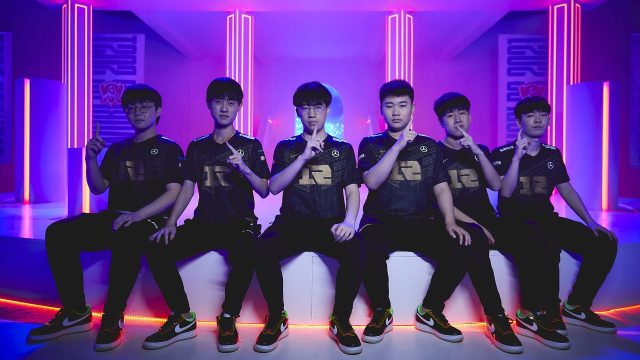 Provided by Riot Games/Getty Images RNG are the first team to punch their quarterfinals ticket from Group C.

Update: Royal Never Give Up has secured the first seed for the Worlds 2021 quarterfinals after defeating Hanwha Life Esports in a tiebreaker match. RNG will play the second seed from a different group, and HLE will play another group’s first seed. The original story published at 10:33 ET follows:

Royal Never Give Up are the first team to advance to the 2021 League of Legends World Championship quarterfinals in Group C after their win over PSG Talon in their second game of the day. The victory brought them to a 4-1 record, which only Hanwha Life Esports can possibly match at the time of publishing. Hanwha Life Esports joined them as the second team to qualify after defeating RNG themselves in their last game of the day, completing their second round-robin with a 3-0 record. The two will play a tiebreaker match to determine seeding for the quarterfinals.

Royal Never Give Up

RNG started their Worlds 2021 journey with a 3-0 record in the first round-robin, taking wins off each other team in the group. Despite the 3-0, however, their games were somewhat close with only their game against Fnatic ending quickly and with a large gold lead. Their games versus PSG Talon and Hanwha Life were much closer, lasting around 40 minutes with relatively even gold at the end of the game.

RNG have shown a lot of strong, proactive decision-making at Worlds so far, they are often the team to set the pace in many of their games. They’ve faltered in some of their mid-game scenarios, however, with botched teamfights and poor individual play from certain members that has put them in vulnerable positions. In the second round-robin, they lost their first game to Fnatic — which also happened to be Fnatic’s first win — because of these errors. Thanks to some incredible Viego play by Gabriël “Bwipo” Rau, all it took was one mistake from a single RNG player to give him the resets he needed in their teamfights to hand RNG their first loss.

RNG still need to be cleaner in their attempts at closing out the game if they want to repeat their 2021 Mid-Season Invitational victory here at Worlds, especially with the 1-2 record in the second round robin. But for now, they have secured a spot in the knockout stage and will face off against a second-seed team from Group A, B or D next weekend in their quarterfinal match.

Hanwha Life had a stellar second round robin, completing their sweep 3-0 and puts South Korea’s record on the second day at 9-0. Their first game of Day 6 against PSG Talon was a fairly one sided game, ending just under 30 minutes with a 16K gold lead. Their next two games against Fnatic and RNG respectively were much closer, going to 43 minutes against Fnatic and 35 minutes against RNG.

In general, the team has leveled up throughout the event, though they still depend heavily on pop-off performances from Jeong “Chovy” Ji-hoon. HLE top laner Park “Morgan” Gi-tae has been criticized for his weak level of play compared to his teammates and other top laners at Worlds, but he has been much less of a liability as the tournament continued. In HLE’s two stronger wins in the second round-robin against RNG and PSG, Morgan had a 37 KDA, only dying once. In the scrappy FNC game, it was much lower, but he still finished with a solid 3 KDA, despite getting picked on constantly the entire early game by Bwipo and Adam “Adam” Maanane.

HLE will go on to the quarterfinals to face a first-seed opponent from the other three groups for a chance to continue their Worlds 2021 journey. Watch the rest of the matches at lolesports.com to get rewards and drops to your League account.