Exclusive free content is coming to VALORANT, League of Legends, Wild Rift and Legends of Runeterra 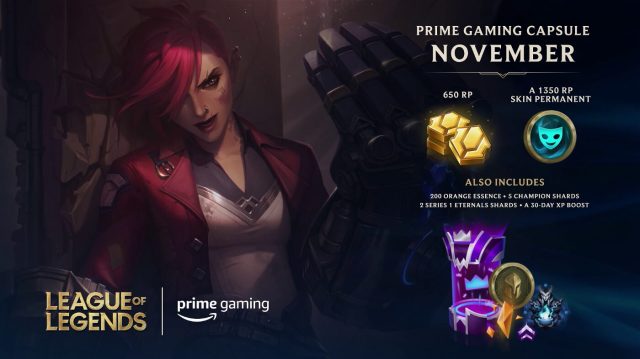 Earlier today, Riot Games and Amazon’s Prime Gaming announced a new long-term sponsorship deal that will make Prime Gaming a global sponsor for all of Riot’s esports titles. As part of that deal, Prime is also committing to a year-long run of giveaways for all of Riot’s games. These giveaways will include a huge new Prime Gaming Capsule in League of Legends, as well as freebies in Wild Rift, VALORANT and Legends of Runeterra.

“Riot Games is an incredible partner that will help bring even more value to the Amazon Prime membership,” Larry Plotnick, GM of Prime Gaming, said in an announcement on the official Prime Gaming website. “We’ve been working with Riot for a while now, but this collaboration raises the value bar for customers to ensure Riot’s games are even better with Amazon Prime. We’re looking forward to featuring additional content for Prime Gaming members in the coming months.”

With the new Prime Gaming deal running across all of Riot’s titles, the giveaways available through Twitch’s Prime Gaming center also span all of those titles.

LoL players will receive a Prime Gaming Capsule on a monthly basis. While a tweet from the League of Legends channel only mentioned seven capsules, the giveaway page shows that these capsules will drop through December 2022. But, whether there are seven overall capsules wrapped into this deal or 15, the total value here is still bonkers.

Along with the general gaming giveaways in the Prime Gaming Capsule, this new slate of offers also includes esports exclusives. With Worlds 2021 currently ongoing, the first of these giveaways has already dropped. Players that are subscribed to Prime Gaming can currently redeem a Worlds 2021 “Happiness Overload” emote.

Looking at the Prime Gaming giveaway page, we can also see “Bonus Content” drops marked for May 2022 and October 2022. The official statement spoke about bonus esports giveaways for major esports events and both of these drops are scheduled in the timeframe we expect to see the 2022 Mid-Season Invitational and the 2022 League of Legends World Championship.

The Prime Gaming Wild Rift giveaways will begin on Nov. 18. From that point on, players will be able to redeem an exclusive content drop every two weeks for a period of one year. There will be a total of at least 24 giveaways for Wild Rift and the drops will, at random, include:

The VALORANT giveaways will begin once the current series concludes in January 2022. Prime subscribers will then be able to start grabbing one year’s worth of “exclusive improved core content” for VALORANT gameplay. The planned giveaways include: