After fulfilling half of his two year contract, his new destination is unknown 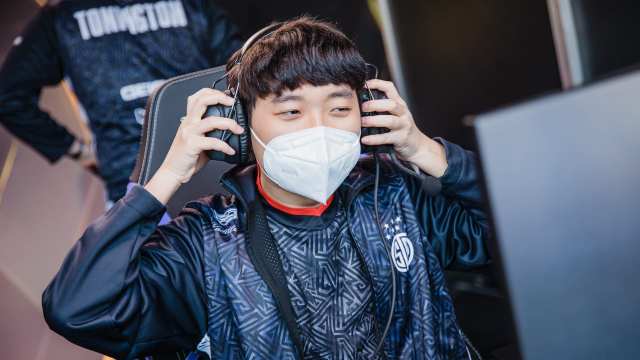 Provided by Riot Games SwordArt, who only fulfilled half of his record breaking two year contract, will leave TSM

After officially announcing the departure of their legendary mid laner and former head coach, Søren “Bjergsen” Bjerg, TSM are also splitting with their 2021 support, Hu “SwordArt” Shuo-Chieh, according to a report made by Dot Esports.

SwordArt joined the North American org in the off-season before the 2021 season, with a reported $6 million salary, making him the highest-paid League Championship Series player ever. However, he is leaving the team prematurely.

SwordArt’s original contract with TSM was set to expire in 2022. TSM did not perform as expected in 2021 given the cost of their roster, and the team has already announced multiple changes moving forward into the 2022 season. The free agency period starts Nov. 15.

The departure of their star support falls in line with a video put out by TSM themselves that they were looking to rebuild for 2022, with plans to sign younger talent that has a strong potential for growth moving forward. TSM has not yet announced further plans on their upcoming roster.

SwordArt has been a highly successful and popular support player, originally gaining fame as the Flash Wolves support in their prime years before moving to the League of Legends Pro League team, Suning, where he played for two years.

In his second year on Suning, he helped lead the team to the 2020 League of Legends World Championship finals against DAMWON Gaming (now known as DWG KIA). He lost the series, taking second at Worlds 2020, but his performance there reignited his fame which helped earn him his large salary at TSM.

In total, SwordArt has attended Worlds six times, four of which were with the famous Flash Wolves team. His first attendance was in 2013 on the Gamania Bears, a now-disbanded org.

With Bjergsen’s departure and potential move to Team Liquid, along with SwordArts’ reported departure and Tristan “PowerOfEvil”Schrage’s release from his contract, TSM has already started making plenty of off-season changes.

TSM declined to comment on SwordArt’s departure. Upcomer will update this story as it develops.