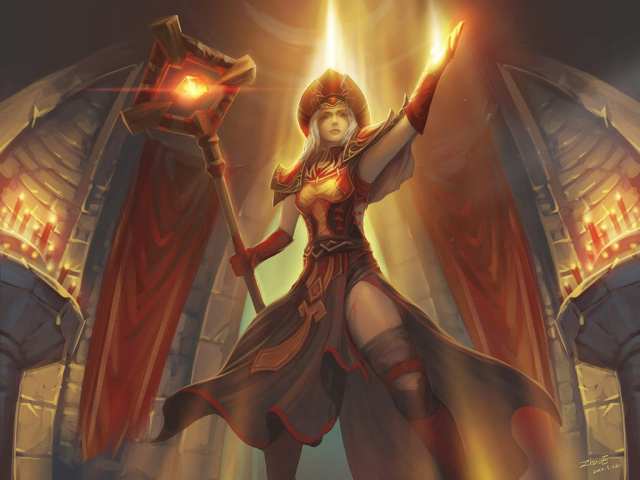 With Sally Whitemane entering the Nexus via Heroes of the Storm’s PTR, we’re finally getting a good look at her full kit and talents. This article will be showcasing her base abilities and a couple of the many builds that have popped up on the PTR.

(Q) Desperate Plea: This ability heals for a small amount and gives Whitemane a stack (to a maximum of 3) of Desperation that lasts for 4 seconds. Desperate Plea has a very short cooldown which allows you to cast it frequently for quick, small heals. Each stack of Desperation increases the mana cost of this ability by 60. As this is her only ability that costs resources, playing Whitemane is all about managing your Desperation so as to not run out of mana.

(W) Inquisition: Whitemane channels a laser for up to 3 seconds, slowing and damaging the target enemy hero.

(Trait) Zeal: Any ability she uses that heals an ally applies Zeal for 8 seconds. While infused with Zeal, allies are healed for 100% of the damage that Whitemane deals.

Scarlet Aegis: When cast, this ability heals nearby allies for a small amount, applies Zeal, and grants 40 armor for 4 seconds.

Divine Reckoning: After a short delay, a large circle appears and deals consistent damage over time for 4 seconds.

Q Build: This build for Whitemane focusses solely on her Q ability, Desperate Plea. I believe this build offers the most straight-up self-sustain for Whitemane while offering loads of healing for her allies. Keeping yourself at 2 Desperation with this build seems to offer really good sustain.

Utility Healer Build: This build may not have the same healing numbers as the previous build, but I think it’s more competitive because of the utility it offers in addition to good healing output.

Thank you to everyone reading this, please feel free to share if you find it interesting or to let me know in the comments what I could do better. I think Whitemane is going to be an excellent addition to the Nexus and I’m very excited to see her in action! Remember, these builds are tentative as she’s only been on PTR for a few days and there will most likely be a few balance changes before she is officially released. I’ll see you guys in the Nexus!