Proper wins the OWL 2022 Alarm Rookie of the Year award

Proper wins the OWL 2022 Alarm Rookie of the Year award 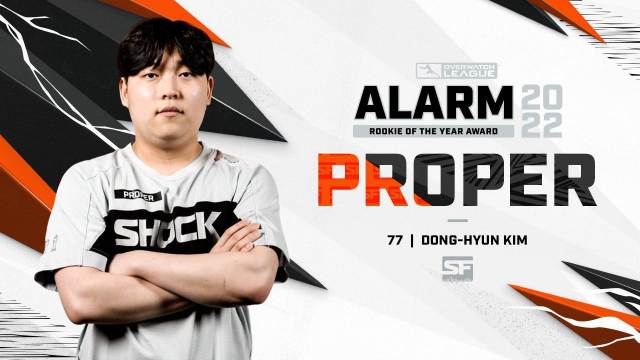 Provided by Activision-Blizzard. Proper is the OWL 2022 Alarm Rookie of the Year.

To little surprise, San Francisco Shock’s Kim “Proper” Dong-hyun is the Alarm Rookie of the Year award winner for the Overwatch League 2022 season. After joining the Shock as a key piece to their re-tooled roster in 2022, he helped lead the team to a top-tier regular season. As a player also in the league MVP discussions, this trophy win was almost unanimous.

This year's #OWLGrandFinals award goes to the exceptionally talented @Ow_proper!

A true comparison to Alarm

From the get-go, it was clear how important Proper was to the San Francisco Shock’s 2022 season. His ability to win fights out of thin air due to both game sense and aim was almost unparalleled in the Kickoff Clash. As the metas changed, one thing stayed the same: that takeover ability. Even as a rookie of the year award winner, Proper was so crucial to the 2022 roster’s success that he was only comparable to two players before him. The first was when every player was a rookie back in the inaugural season when Bang “JJoNak” Seong-hyun’s Zenyatta play defined the New York Excelsior’s success. The second was Kim “Alarm” Kyeong-bo, whose support play helped bring the Philadelphia Fusion to successful tournaments.

Where the Role Stars voting was clearly a bit mixed for almost all other positions, Proper’s Alarm Rookie of the Year trophy was clearly deserved. Looking at the voting in detail, out of 84 votes, 68 of them were for Proper. That’s just shy of 81% of the vote.

Plus, to end it all, he has some of the best stats the league has seen in a while. According to the league’s official post on his trophy win, he finished the regular season with 9.9 final blows per 10 minutes. That is the highest in league history. On top of three recorded Fleta Deadlifts this season (maps where he had more than 50% of his team’s final blows), Proper was a monster. We’ll have to wait and see if he manages to also get the MVP award on the final day of the 2022 playoffs.