Price, Soap, Farah, Ghost operators could be locked behind paywall in MW2

Price, Soap, Farah, Ghost operators could be locked behind paywall in MW2 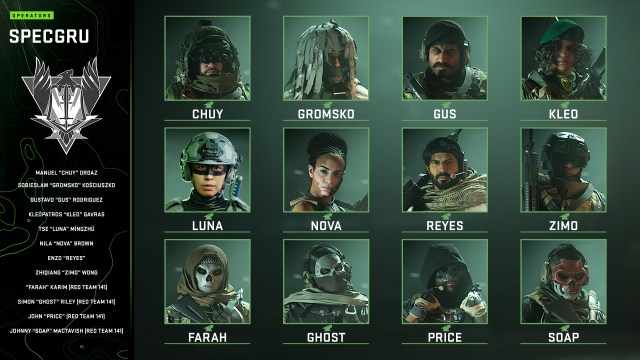 Provided by Activision Call of Duty: Modern Warfare 2 screenshot of the SpecGru Operators.

The Vault Edition of Call of Duty: Modern Warfare 2 has seen its fair share of controversy before the game has even come out. When Activision announced the contents of the edition, they revealed something called the FJX Cinder Weapon Vault. It was later revealed that this Weapon Vault gives players every single attachment for the M4. With the Weapon Platform system in multiplayer, this means that a majority of attachments for the guns in the M4 Platform are also fully unlocked. While this was controversial enough, it seems Activision might also lock some popular operators in MW2 behind the Vault Edition as well.

The operators of Captain Price, Soap, Farah, and Ghost all come with the Vault Edition in their special Task Force 141 skins. These skins were on full display in the MW2 beta, as Vault Edition owners had access to them. This wasn’t initially a big deal, as many players thought the Task Force 141 skins were just cosmetics for the base operators of Price, Soap, Farah, and Ghost.

However, the latest marketing materials from Activision lead players to believe that the Task Force 141 skins are the base Operators themselves.

Essentially, what many players believe is that the four operators won’t be unlockable in the base version of MW2. Instead, only those with the Vault Edition of the game, and thus owners of the Task Force 141 skins, will have access to these Operators. Traditionally, every player has access to all of the base operators in the game either by default or by unlocking them via an in-game challenge. Players can then earn skins for them through the Battle Pass, store bundles, challenges, etc. Price, Soap, Farah, and Ghost might not be unlockable this way, though.

It’s worth noting that none of this is confirmed, but the evidence behind the thought is fairly extensive. For one, Activision stated that “eighteen more operators can be unlocked through Campaign, Multiplayer, and Special Ops challenges to be detailed as part of our progression overview later this month.”

This came from the recent blog post that detailed the content fans can expect at launch in MW2.

The company went on to say “Price, Farah, Soap, and Ghost operators are available via the Vault Edition’s Red Team 141 pack.” With these two lines, fans have inferred that the only way to use these operators is by purchasing the Vault Edition of MW2 and not by completing challenges.

If true, this will not go over well in the community. Fans who can’t purchase the Vault Edition, which goes for $99.99, will not be able to unlock the four most popular O=operators in MW2. Moreover, the Vault Edition also contains the FJX Cinder Weapon Vault, which gives players a fully unlocked M4 right out of the gate.

We’ll have to wait and see whether or not the operators of Soap, Price, Farah, and Ghost are truly locked behind the Vault Edition when MW2 launches on Oct. 28.