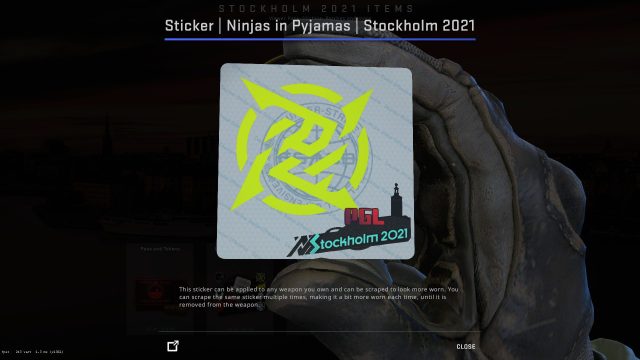 Provided by BetwayCSGO An NiP team sticker for the PGL Major Stockholm 2021.

Valve announced on Friday that only those who reach the playoffs of PGL Major Stockholm 2021 will receive signature player stickers at the  are those that belong to teams that reach the quarter finals or beyond, according to a tweet from the official CS:GO account. This is a change from previous majors, where qualification alone was enough to guarantee individual player signature stickers in addition to their team stickers.

The new content patch on CS:GO, released on Oct. 21, 2021, added the viewing pass, pick’ems, stickers and the rest of the content pertaining to the PGL Major to the game. Fans can purchase capsules with a chance to receive different stickers from their favorite teams. Player signature stickers are not yet available for purchase on account of the change.

2021 PGL "Finalists" signature stickers will include signatures from the following teams:

Broadcast talent, esports personalities and players, both those who did and didn’t qualify for the major, have all spoken out against the change. Players like Emil “Magisk” Reif levelled accusations that the change came from a lack of preparedness from Valve, arguing that with so long since the last major, most people would expect their player stickers to return as normal.

“We got a bit sad I guess. Everyone wants their sticker in the game,” Ninjas in Pyjamas’ Linus “LNZ” Holtäng said. “But at the same time I feel like it shouldn’t be a problem for us to reach the top eight. If our goal is to win the major, then we shouldn’t be sad that we aren’t getting stickers until the top eight.”

LNZ is a major debutant, meaning he has not yet been immortalized in CS:GO with his own player sticker.

While no team wants to count themselves out of the running for playoffs — or even winning the whole major — some teams are less favored than NiP. Teams like the Copenhagen Flames, where both the team and the players rely on the injection of cash from fifty per cent of their sticker earnings, may have a harder road to reach the quarters than others.

“I’m really sad about it but it will be alright [sic],” Copenhagen Flames’ Nico “nicoodoz” Tamjidi said in a tweet.

From a purely financial standpoint, there’s a backwards situation where the well-funded teams and players — NAVI, Astralis, FaZe, etc. — have a higher likelihood of earning extra money from player stickers than the weaker teams whose players may have a greater need for the income from their major appearance. On the opposite side, some argue that the change is a positive one, as it makes the stickers more exclusive and, therefore, special.

Valve have not yet made it clear why they decided to make this change from previous majors. Upcomer reached out to Valve for comment but, at the time of posting, have not heard back with a reply.