PAX Aus returns for 2022 to a sold-out crowd

PAX Aus returns for 2022 to a sold-out crowd

Around 80,000 fans stormed MCEC to try games, meet their heroes, and more 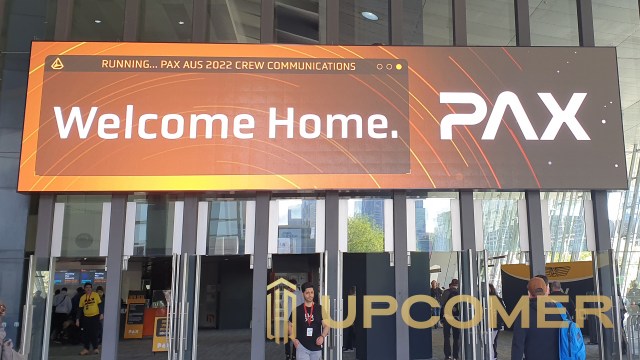 Photo by Michelle Mannering for Upcomer. The entrance to PAX Aus welcomed gamers from across the world to their new temporary home.

Last weekend, Melbourne became the home for all gamers. PAX Australia (PAX Aus), Australia’s biggest gaming expo saw around 80,000 fans walk through the doors. Attendees indulged in panels, meetups, freebies, and of course games. It’s the first time since 2019 that players were able to arrive in person at Melbourne Convention Exhibition Center (MCEC). Check out what went down during this sold out event.

#PAXAUS 2022 may be over – but the friends you made, games you discovered, kebabs you digested and sea shanties you bellowed will stay with you until the next one! Thank you from all of us for one incredible weekend – see you next PAX! pic.twitter.com/QHbVlHL9to

The Expo Hall is one of the most loved parts of PAX Aus. From crowds to esports, games, and SWAG, fans lined up for hours before opening just to be the first ones in the door. There were stalls to buy merchandise, local artwork, experience some indie games, or kick back and relax in the arcade area. Walking around chatting to the organizers and enforcers, it was clear everyone was excited to be back in person. The crowds were wild, but controlled, and everyone loved being able to physically see and hug others.

Being Australia’s largest gaming expo, PAX Aus would be lacking without any games. The event falls during Melbourne International Games (MIGW) and attendees were treated to plenty of games. The expo hall was packed with exhibitors showcasing the latest peripherals, video games, and systems. The likes of Republic of Games (ROG), Intel, AMD, Logitech, HyperX, AORUS, Aftershock, MWAVE, Coolermaster, and Seagate provided lots of hands on experience. Each booths had mass giveaways with keyboards, headsets, mice, graphics cards, and even PCs given away to lucky participants.

This year, the Indie showcase featured top games from Australia and beyond. Cult of the Lamb was one of the stand outs. The booth was always packed with gamers wanting to play the award winning game. Just days earlier, Cult of the Lamb took home four trophies during the Australian Game Developer Awards – best narrative, best music, best gameplay, and best overall game. They’ll now go on to compete for the international game developer awards.

Having already won 3 #AGDAs, @cultofthelamb tops the night off winning Game of the Year 🥳

Square Enix’s booth was another wildly popular booth Fans lined up for hours just to play through a Final Fantasy XIV raid and receive some custom SWAG. Some of the more ‘classic’ games like League of Legends and VALORANT were available to play at various booths, and there was plenty of content from Sega and Nintendo floating around.

Whilst the hall was packed and participants had plenty to do, there were a few big noticeable gaps. Brands like MSI, Razer, Xbox, PlayStation, and Nintendo didn’t have large booth presence. Instead, they partnered with other brands. MSI gear was available to try at Intel and MWAVE, and Xbox had some visible presence with Legion. The giant Razer snake logo and collectable SWAG was definitely missed. Nintendo usually have a large presence and they were no where to be seen. This is even more concerning as they hosted a large tent just few blocks away at the Australian Football Grand Final only weeks earlier. Even without these giants however, the PAX Aus Expo Hall still felt like it normally does – a whole bunch of gamers just keen to try out some new gear.

Twitch Australia could have very easily been one of these missing pieces. Twitch Con in San Diego fell at the same time as PAX Aus. Despite the clash in events, it was great to see so many Twitch streamers at PAX Aus, like Lachlan, Lazarbeam, and Loserfruit. Twitch ANZ had a large iconic purple booth and plenty of presence during PAX Aus 2022.

PAX Aus is the home for all gamers, but not everyone wants to play games. Some fans want to sit and watch. ESL Australia again hosted the ESL Arena. This is where fans can watch top level esports. For the first time in Australia, ESL Australia showcased competitive Overwatch 2 at PAX Aus. Having only launched 3 days before PAX Aus, it was the first real look at the game. It wasn’t without some issues on Blizzard’s end, but fans enjoyed seeing the display.

The main highlight at PAX Aus 2022 was Road to Rio. This CS:GO competition finds the best talent in each region to compete on the global stage. The Australian finals were played at PAX Aus with Grayhound Gaming taking on JiJieHao (JJH) in a Bo3. It was a nail biting first round as each team took map for map. After around an hour’s play, the score was 12-12. Spectators were glued to the screen unable to take their eyes off the action. But Grayhound ran home and took out the prize. The team will play in the IEM Rio Major later this month.

🇦🇺Yeah The Boys 🇦🇺@grayhoundgaming have defeated JiJieHao International 2-0 and qualify to the #IEM Rio Major! 🇧🇷🇧🇷🇧🇷

One aspects of gaming and pop culture which has slowly grown over the years, is cosplay. People spend hours putting together costumes to mimic their favorite characters. PAX Aus 2022 featured an official cosplay tournament hosted by TikTok. Having only launched by Reed Pop last year in London it made it’s PAX Aus debut. The Cosplay Central Crown Championship is now set to be a PAX staple. The winner (pictured below) goes on to the Cosplay Central Crown Championships Final in Chicago next year. They also received return flights, accommodation, a trophy, and two 3-day passes to PAX Aus 2023.

A huge congratulations to @Alt_F4Cosplay – our 2022 Cosplay Central Crown Championships winner at #PAXAUS! We were lost for words. Incredible. #cosplay @tiktokaustralia pic.twitter.com/GfBUwilBmz

This year’s cosplays were next level; you could see fans went all out to compete for the prize — or just to dress up and take photos with their friends; yes it’s a thing!

The cosplay at #PAXAUS has been on-point this weekend! You all look incredible! Cosplaying this weekend? TikTok has you covered with the TikTok Cosplay Lounge and TikTok Cosplay Theater. Limited Sunday Badges still remaining. pic.twitter.com/Z6DBmrW9j5

An often forgotten part of PAX Aus are the talks. Whilst many fans are roaming the expo hall, chilling in the handheld lounge, watching some speed running, playing table top games, or meeting up with their friends and community, others are listening to experts. PAX Aus 2022  made up for the lack of in person events from the past two years. There were talks and panels on game design, careers in gaming, health and governance, marketing, and so much more. A highlight for many attendees was having Shuhei Yoshida give the storytime keynote.

A loved iconic in gaming, Shuhei Yoshida was the President of SIE Worldwide Studios for Sony Interactive Entertainment from 2008 to 2019. He talked about his working life in Australia, his passion for virtual reality, and more. Many fans had the chance to meet him in person and Mr. Yoshida bought back a piece of Australia in the form of Tim Tams!

Well, that’s a wrap on PAX Aus 2022. We’re sure the event will return for next year and will continue to get better and better.