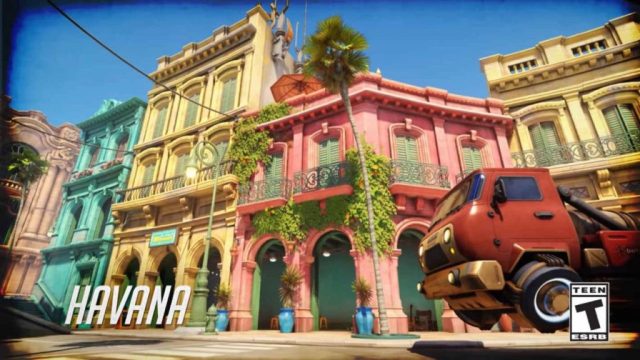 Overwatch released a new patch on May 7. The new map that was introduced with the Storm Rising Archives event, Havana, has been released. The two new Overwatch League All-Star skins are available to players too, and a few bug fixes have been made.

Visit the birthplace of the cha-cha-chá! 💃

Celebrate in the streets of Havana now on PC and PlayStation 4. pic.twitter.com/cBuFamHNvc

Havana was first seen in the Storm Rising Archives event, where players fought off waves of Talon AI bot opponents. This map is now for the Escort game mode. In the Escort game mode, there is an attacking and defending team, and the attacking team tries to “escort” the payload to the final destination. The Havana map has three main areas of progression that include the Havana streets, the Don Rumbotico distillery, and then the Seaside Fort.

Havana, a vibrant, historic port city where the winds of change blow strong, is home to Overwatch’s newest Escort map!

Begin your trip at the Taller de Sebastián, where the classic cars that line Havana’s bustling streets stop for refueling and repair. Escort a truck of rum barrels on the sun-drenched cobblestone roads, fighting off those who try to stop you. As you make your way, duck into a colorful building to escape enemy fire and savor the impressive flavors of Havana at La Cocina de Miranda or Café del Sol. Battle your opponents through the alleys until you reach the Don Rumbotico rum distillery, a once little-known local treasure that has recently earned international acclaim. Finally, guide the jalopy through the distillery to its destination at the Havana Sea Fort, a historical landmark recently purchased by an anonymous financial group and closed to the public.

Havana is not available for play in Competitive until May 21. The 14-day wait is to give players time to get used to the map itself.

Gear up for #OWL2019 All Stars with legendary skins for 200 tokens each!

The Overwatch League All-Star skins for Lúcio and Mercy are also now available with this patch. Their official names are the 2019 Atlantic All-Star Mercy and 2019 Pacific All-Star Lúcio skins. Players can purchase them in the menu for 200 League Tokens each. The skins will be available between May 7 and May 22.

The bug fixes for this patch only apply to the new Havana map. They include the following:

For a full list of updates, check out the Overwatch patch notes.