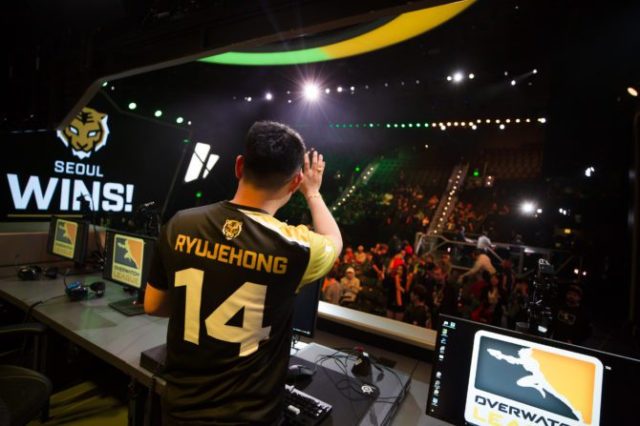 Day one of the Overwatch League Stage 1 Playoffs just ended. Despite only two games being shown, a massive upset has occurred that has shattered all expectations.

For those who don’t know, there are four stages in a season of the Overwatch League, each with their own playoffs. In this second season, the first stage’s playoffs are just beginning. The quarterfinals span March 21 and 22. The first two matches were Seoul Dynasty vs. New York Excelsior and Boston Uprising vs. Vancouver Titans.

This was the major surprise for Overwatch League. The Seoul Dynasty beat the New York Excelsior 3-1, eliminating them in the first round of the stage playoffs.

Out of the gate, the Excelsior seemed disorganized and split, leading to a crucial and dominant loss on the first map. Everyone on the New York team underperformed, with the standout on the Seoul team being one of their substitutes: Dong-eon “FITS” Kim. But when map two began and their original roster came back, New York still seemed shook. They lost the second map due to great tank play by Chan-hyung “Fissure” Baek and Min-hyuk “Michelle” Choi.

New York did show some great skill in its third map, winning in clutch fashion. But the fourth map was an unfortunate loss, and just like that, they were gone. The second seed eliminated by the seventh seed. This game gave a true meaning to “March Madness.”

In comparison to the previous match, this was much quicker and more expected. The Boston Uprising lost to the Vancouver Titans in a 3-0 playoff sweep.

The @VancouverTitans take the series 3-0 and are still in our Stage 1 Playoffs! #OWL2019

They face the @SeoulDynasty next in the Semifinals on Saturday! pic.twitter.com/XvUSJm8MXs

The Titans, though still questioned about whether they deserved the first seed, did what New York couldn’t. They completely stomped over the opponent like they should have done. The standouts in this Overwatch League match from start to finish were main tank Sang-beom “Bumper” Park and support Joo-Seok “Twilight” Lee. I would go over each map in this series, but the only map worth talking about was the Control map, Ilios.

Why only Ilios? Boston decided to try to play multiple DPS heroes, with a rare sighting of Junkrat. They did end up losing the map and series, but it was clear Boston was playing with house money. They got into the playoffs by the skin of their teeth, and they ended up facing the best team in the league in the first round. For a sweep, Boston showed skill and, most importantly, that they were having a fun time.

Changes for the future brackets

This solidifies a Seoul vs. Vancouver match later on this week, but that also means that the San Francisco Shock won’t face Vancouver until the finals (if they get there). These brackets rely on original seeding, which is why it leads to that conclusion.

Stay tuned for our coverage on the upcoming Philadelphia Fusion vs. Atlanta Reign and San Francisco Shock vs. Toronto Defiant. If there’s one thing you should learn from today, it is that anyone can win if they put their mind to it. These are exciting times for Overwatch League.