Sojourn gets slight changes, but will it be enough to knock her down in the meta 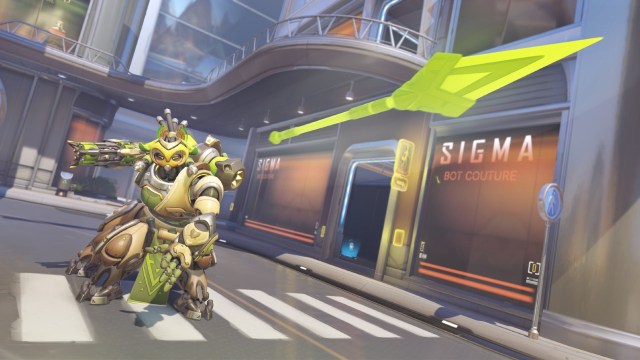 Provided by Activision-Blizzard. Orisa, throwing her Javelin in Overwatch 2.

In patch notes just released by the Overwatch 2 team, minor changes have come out for heroes like Orisa, Roadhog and Sojourn. The team has confirmed that major changes will come by seasonally, while these hotfixes signify where changes are headed. One of the notable changes comes to Sojourn, a change but fans assume that it won’t be enough to shift how strong she is alongside Mercy in Season 2.

For Orisa, she only has one change in these Overwatch 2 patch notes, but it is a significant one. Her ability Fortify allows her to gain extra health, but that is decreased from 125 to 75. That alone makes her less tanky and hard to kill, but hard to tell how much one change will do.

The team specifically talks about Chain Hook and how it leads to easy kills in these patch notes, so that is one of the abilities getting changes for Roadhog. To start, the damage the ability does as it pulls the enemy toward you is down, from 30 to only 5. Also, the distance it leaves the enemy after it pulls them is now a little further away, increased from 3 to 4 meters.

Asides from that, Roadhog’s base attacks with his Scrap Gun got some changes as well. The damage-per-pellet is lower, from 6.6 to 6. Plus, his recovery time post-shot is lower, from 0.85 to 0.8 seconds, and his reload time is down from 2 to 1.75 seconds. Lastly, his maximum ammo is up from 5 to 6 shots. Overall, along with the hook changes, this seems that one-shots from Chain Hook are going to be a little harder, but still very useful. The team also confirmed that he will be getting more significant changes soon.

Every player in Overwatch 2 knows how powerful Sojourn still is, and this change aims to make her a little less viable. The change only comes to her Railgun, with her energy gain no longer based on how much damage she does. Now, no matter what or where you hit, you gain 5 energy per shot hit. Alongside that, her damage per primary fire is lower, from 10 to 9.

In the final hero change, Kiriko gets a little nerf to her healing. The recovery time between using her Healing Ofuda is up from 0.85 to 1 second long. This means that she won’t be able to heal as fast as she did before, allowing more time to use the offensive parts of her kit.