Chris Pratt will soon make his mark on the Mushroom Kingdom 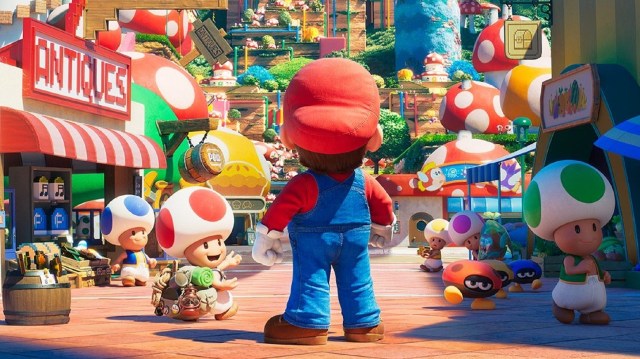 Provided by @NintendoAmerica via Twitter This is the first public image of the movie and its first public video footage will follow later this week.

Nintendo of America announced Tuesday that an upcoming Nintendo Direct will include a world premiere trailer and other details about the Super Mario Bros. Movie. Nintendo will stream this Direct on its YouTube and Twitch channels starting at 4:05 p.m. ET on Thursday.

The announcement of the Mario movie Nintendo Direct also included a promotional poster. This marks the first public image of the Mario movie that Nintendo has shared. This image depicts Mario with his back to the camera as he looks toward Peach’s Castle, which sits atop a mountain amid a colorful and expressive Mushroom Kingdom.

The poster also shows off multiple Toads and Biddybuds. It highlights the movie’s art style, which differs somewhat from the style of traditional Mario video games. Mario himself sports a slightly updated design, which includes small slits in his gloves. However, for more information about what the movie will look and sound like, players will have to wait for the new trailer on Thursday.

Tune in at 1:05 p.m. PT on 10/6 for a #NintendoDirect: The Super Mario Bros. Movie presentation introducing the world premiere trailer for the upcoming film (no game information will be featured).

The Mario movie was first announced during a Nintendo Direct in September of 2021. At that time, Mario creator Shigeru Miyamoto confirmed that the movie would include a surprisingly star-studded line-up of voice actors. The cast includes Chris Pratt, Anya Taylor-Joy, Charlie Day, Jack Black, Keegan Michael-Key, Seth Rogen, and even Mario’s original voice actor, Charles Martinet (although he won’t actually be voicing Mario).

Since then, there have been minimal updates on the movie. However, Nintendo has confirmed that the movie should launch in April of 2023. Illumination founder and CEO Chris Meledandri is producing the movie alongside Miyamoto.

As of now, details about the Mario movie’s plot are unknown. Day confirmed in an interview with ScreenRant that even the voice actors themselves have been kept relatively in the dark regarding the film’s story. Nevertheless, fans will get their first real glimpse at what the movie will be like later this week.