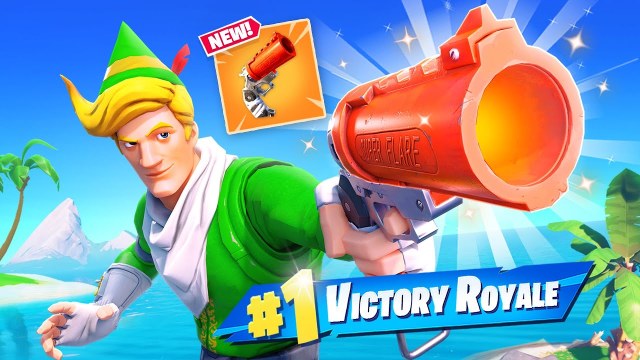 It’s routine for Fortnite to cycle through its vast armory, pulling some weapons to rotate in with others, rinse and repeat. According to renowned Fortnite leaker Mang0e_, it looks like the next weapon to make the rotation is the flare gun. It also appears to be coming back with style, with a nice little buff on top of it.

The flare gun may be coming back to core modes soon, the duration for marking enemies was re-added and increased to 15 seconds. pic.twitter.com/Kf9IICjFhK

“The flare gun may be coming back to core modes soon,” the dataminer tweeted. “The duration for marking enemies was re-added and increased to 15 seconds.”

Mang0e_ found this info in the recent 14.30 update, which included a combat shotgun buff and the Rally Royale limited-time mode. If this datamining is accurate, these extra 15 seconds of marking enemies could be a game-changer for many Fortnite players. Some of Mang0e_’s Twitter followers also shared the rumors they learned, such as a legacy version called “Flame On.”

“There is also a legacy called ‘Flame On’ and I’m pretty sure you have to eliminate someone with the flare gun so epic!” TripleGhoster replied to Mang0e_’s original tweet.

A flare gun that packs firepower

If the flare gun does return, it will be a fairly quick turnaround. It came back with update 13.20 over the summer, but then it left again when Chapter 2 – Season 4 released. With the new fire mechanics currently running in this season, many hope that the flare gun will have a place in the arsenal once more. If so, we may see quite a number of flare guns firing throughout matches. That could be entertaining in of itself.

Epic Games’ lips are zipped for the time being. Mang0e_ reported his findings last Thursday, October 15, and the Fortnite team hasn’t peeped a word about it. When it will unlock (or if it will unlock at all) is strictly in the developer’s court. In the meantime, be sure to stick with Daily Esports for all Fortnite news as it develops.