MultiVersus has room for anyone and everyone on their hype train

MultiVersus has room for anyone and everyone on their hype train

After a fantastic LAN debut, the diverse playerbase and community is excited for the future. 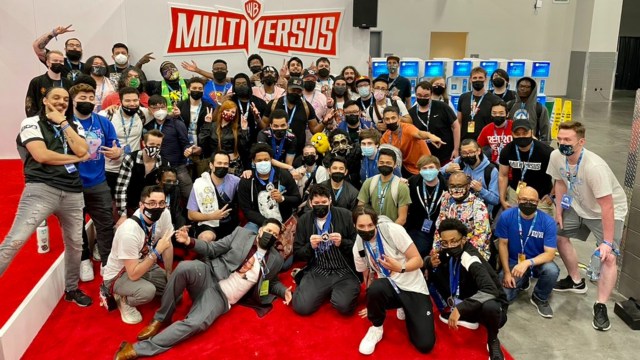 Provided by @Multiversus Win or lose, the Multiversus community is like one big family.

Over the years, many “Smash Killers” have popped up in attempts to dethrone the king of the platform fighter subgenre; Super Smash Bros. However, none have been able to put everything together to get a majority of the Smash Bros. playerbase to come over. However, the latest challenger to the throne is a little bit different. Warner Bros. and Player First Games, MultiVersus isn’t just going after the Smash playerbase, it’s becoming a home for players not only in the Smash community and Platform fighter community, but the entire gaming community-at-large. The Evo 2022 LAN was proof that it’s already working.

The $100,000 side event at Evo 2022 for the open-beta MultiVersus had a bigger prize pool than any game at the event while also having more entries than some of the main titles. And when it came to which teams and players were the best, it wasn’t all just Smash pros. In fact, there was only one team in Top 8 with any prominent Smash Bros. players. The rest were filled from all sorts of gaming communities from Team Fortress 2, Knockout City, Brawhalla, Nickelodeon All-Star Brawl, Rogue Company among others.

One of the biggest factors why the game has such a large reach is its ease of access. For any real threat to Smash Bros. to have any chance to make a real impact, it has to come correct from the start. MultiVersus’ first impression has been near immaculate. The game exploded on the scene thanks to the expansive Warner Bros. IP library, developer transparency, and the fantastic netcode making the game feel good to play online all contributing to MultiVersus’ strong start. But most importantly, the game has crossplay on a variety of different platforms — including PC — which James “VoiD” Makekau-Tyson says is a game changer for the genre.

“It’s on PC, it’s on everything; which makes it easy to download,” VoiD explained. “But honestly, it’s silly, fun and you don’t have to be good to have fun.”

Plus, the game has done something that many publishers are scared of doing; making their game free-to-play. MultiVersus’ free-to play status has no doubt helped the game shatter as many records as it has. When it comes to the overwhelming response the game has had at Evo 2022, tournament runner-up Tyler “Mirrorman” Morgan said he’s not surprised.

“It being free-to-play and on multiple consoles makes it easily the most accessible platform fighter come out in a long time,” Mirrorman said.

Mirrorman is a top NASB player but also has a background in TF2, he also isn’t the only prominent shooting game player in the scene. The number one seed for this event was the duo of Leviathan and Synume, two players who were not known for platform fighters before playing MultiVersus. Instead, the two made names for themselves in titles like Rogue Company and VALORANT. As a former shooting game player himself, Mirrorman talked about how games like that help out in one of the major skill checks MultiVersus has; communication, thanks to the game having its main focus in 2v2 play. This all just goes to show that anyone with any gaming background can be a pro in MultiVersus.

“Communication is something many teams lack that you might have if you played an FPS or MOBA at a high level.” Mirrorman said. “Having that kind of communication is the best way to make mid-set adjustments.”

The game itself has a lot going for it when it comes to drawing players in, but a game is only as good as it’s community. Prominent Knockout City player Stahly said that the community at Evo has really hammered in that home feel.

“My experience at Evo has been surreal,” Stahly said. “The thing I wanted to do the most was meet everyone in the community in person, everyone’s cool, everyone’s cool with each other.”

With Smash Bros. Ultimate being in a glorified maintenance mode, the door the the throne room is open. MultiVersus is making strides to get there; though the road is long, the game and community is on the right track.