MTG Spoiler: The Amonkhet gods return in War of the Spark

MTG Spoiler: The Amonkhet gods return in War of the Spark 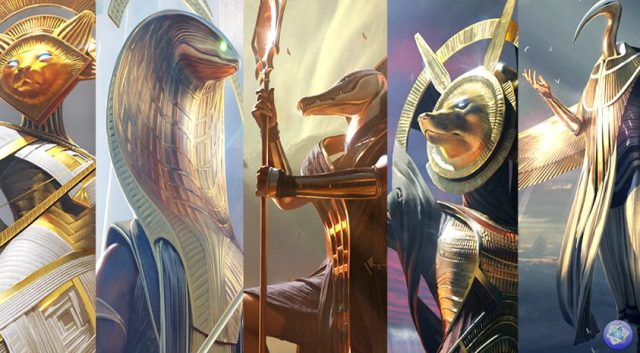 Magic: The Gathering’s War of the Spark spoiler season is in full swing now that the Mythic Invitational is over. We’ve seen some new Planeswalkers revealed, and now we may be seeing some old friends return: The Amonkhet gods.

For those a little behind on the story, Amonkhet is the Egyptian styled plane that we visited a few sets ago. On this plane, we were initially introduced to 5 gods: Hazoret, Oketra, Bontu, Kefnet, and Rhonas. Over the course of the story, we learn that Nicol Bolas has shaped the culture of Amonkhet around a series of trials meant to provide him with the best warriors possible. He would take the winners of these trials, cover them in a blue stone called Lazotep, and resurrect them as the Eternals that we now see in War of the Spark.

Whenever Bolas’ plan came to fruition, the Gatewatch Planeswalkers tried to stop him and got beaten so hard that we actually got cards showing their failure. In the chaos, every god other than Hazoret was killed by Bolas and 3 other Amonkhet gods that Bolas had been hiding for several years.

Even though we saw Bontu, Oketra, Kefnet, and Rhonas die in the second Amonkhet set, Hour of Devastation, there is some artwork floating around Twitter and Reddit that seems to depict their return in War of the Spark. This artwork comes from a banner created by Wizards of the Coast themselves for marketing purposes. In the image, we can see an army of Eternals being overlooked by the undead visages of the 4 dead Amonkhet gods. They seem to be covered in the same Lazotep as the Eternals, which would allow them to travel between planes.

In addition to this art, there was an additional image posted to Twitter not too many days ago from a PAX East display.  This shows a very clear representation of Nicol Bolas standing amidst the resurrected gods.

Ultimately, it’s a pretty safe bet that we’re getting to see the gods come back in War of the Spark, alongside all of the new Planeswalkers. Whether they’ll be spoiled sooner or later is up in the air, but unless this artwork is incredibly misleading or meant for the next set, we should be seeing them rather soon. They were a huge presence in Standard last time around. Hopefully, their cards are just as epic and powerful as their former ones!