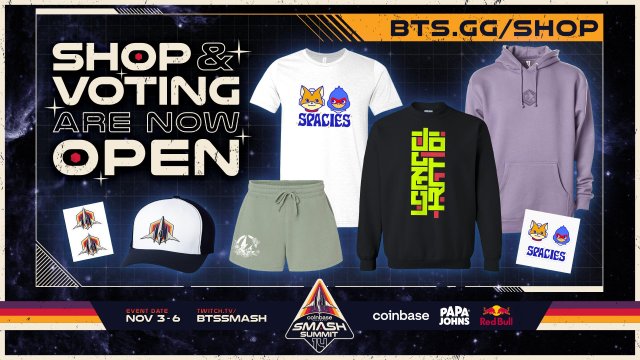 Provided by @BTSsmash via Twitter Fans could earn additional votes by purchasing merch through the online Summit store.

After a grueling campaign week with four vote-in periods on four consecutive days, the line-up of vote-ins for Beyond the Summit’s upcoming Super Smash Bros. Melee invitational, Smash Summit 14, has been determined.

The first of the vote-ins to make it into Smash Summit 14 was New Jersey’s Jacob “Jflex” Pinto. Although he is a long-time member of the Melee community, having entered his first major in 2011, this will mark his first time ever attending a Smash Summit invitational.

Jflex has been a contender to make top 64 at majors for the majority of his career. However, he first began to truly cement his status as a top player through online tournaments in 2021. This culminated with him finishing as No. 37 on the Summer 2022 MPGR, marking his first time appearing on a global ranking.

So far this year, Jflex has placed 17th or higher at every major he has attended. In the process, he has racked up wins over Kurtis “moky” Pratt, Zaid “Spark” Ali and many more. With his consistency and proven ability to take down higher-ranked players, Jflex could very well score a few upsets at Smash Summit 14.

Jeffrey “Axe” Williamson is no stranger to the halls of the Beyond the Summit studio. He was previously a Summit mainstay, attending every single Melee invitational in the series before Smash Summit 12. In addition, he earned his only major victory up to now at Smash Summit 8.

As a result, it is fitting that Axe will return as one of the vote-ins for Smash Summit 14. Despite being a top-five player in 2019, Axe’s momentum dipped during the online era brought on by the COVID-19 pandemic. Throughout this year, he has slowly been working his way back to the top.

Over the past two months, Axe has finished in the top eight of multiple majors. In the process, he has beaten the likes of Jake “Jmook” DiRado, Arjun “lloD” Malhotra, Edgard “n0ne” Sheleby, moky and Hugh “SluG” Hegarty. So, while a victory at Smash Summit 14 seems a bit far-fetched for Axe, it isn’t totally out of reach.

This was such a huge community effort. I would not have made it without all of your votes. THANK YOU SO MUCH!!!

I WILL SEE YOU ALL THERE! https://t.co/44rMpYkhpK

Another veteran of the series, John “KoDoRiN” Ko will attend his fourth consecutive Summit invitational. In addition, Smash Summit 14 will be KoDoRiN’s second straight Summit where he made it in as one of the vote-ins.

While he was ranked 70th on the 2019 MPGR, his skill rose immensely during Melee’s online era. On this year’s summer rankings, KoDoRiN officially cemented his status as a top-10 Melee player in the world. He has placed 13th or higher at every tournament he has entered this year, with multiple top-eight finishes along the way.

With wins on Cody “iBDW” Schwab, Juan “Hungrybox” DeBiedma, lloD and more, KoDoRiN has proven his ability to challenge many of Melee’s elite. Following two consecutive ninth-place finishes at Lost Tech City 2022 and The Big House 10, KoDoRiN will aim to break into top eight again at Smash Summit 14.

Thank you everyone for getting me into summit! pic.twitter.com/Y09pLymMXf

The last and potentially most surprising of the Smash Summit 14 vote-ins was Ralph “Ralph” Arroyo. Ralph has been a high-level player for several years, ranking 89th on the 2019 MPGR. For much of his career, he found moderate success as a Fox and Falco main.

However, over the past year, Ralph has made the unorthodox decision to pick up the mid-tier Pikachu as a dual main alongside Fox. So far, it’s paid off; he hasn’t dropped a set to any unranked players at the majors and regionals he’s attended this year, and he even has a win over Spark.

Despite his impressive consistency, Ralph has a dearth of high-level wins this year. Nevertheless, there’s potentially no better opportunity to rack up good wins than at a stacked invitational like Smash Summit 14.

Took a breather from the result of the last round.

There is not much else in my mind besides all the gratitude I feel for everyone who has showed support at any point during the campaign. Everything absolutely counted, so thank you, everyone!