Marvin the Martian, ‘Game of Thrones’ map coming to MultiVersus 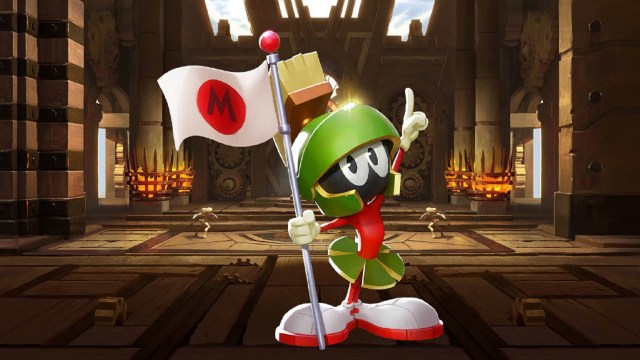 Assets provided by Warner Bros. Games Live gameplay footage for the new character and stage is not yet available.

Marvin the Martian from “Looney Tunes” will become a playable character during MultiVersus Season 2, Warner Bros. Games announced in a press release on Tuesday. In addition, a stage based on “Game of Thrones” is also on the way.

“Hailing from the planet Mars, the well-mannered ‘Looney Tunes’ villain will be equipped with his Illudium Q-36 Explosive Space Modulator explosive device, powerful blaster and spaceship summoning abilities,” the press release said. “The new season will also include an upcoming ‘Game of Thrones’ map that will allow players to hurl opponents away from the Iron Throne, along with Westeros based hazards and a remix of the iconic theme music.”

Neither Marvin the Martian nor the “Game of Thrones” map have a confirmed release date yet for MultiVersus. However, Season 2 itself is set to run until Valentine’s Day 2023. With multiple characters and stages likely to join in the coming months, these recently-announced additions will likely appear in the game before the end of the year.

More about Marvin the Martian in MultiVersus

Even before the official announcement from Warner Bros. Games, leakers had deduced that Marvin the Martian would be the next character to join the game. Likewise, they have uncovered preliminary information about his moveset through datamining.

Marvin the Martian’s signature perks will enable him to redirect and power up projectiles, fire homing missiles at targeted opponents and change the angle of his up-air attack. His moveset also includes a number of projectiles and the ability to apply a Lock On debuff, which is presumably similar to Stripe’s Targeted debuff.

Based on recent leaks, it seems that Marvin the Martian will have three Variants in MultiVersus. One will have him don his Commander X-2 outfit. Meanwhile, the other two costumes are based on “Space Jam” and “Space Jam: A New Legacy.”