A look at the top five decks in the game 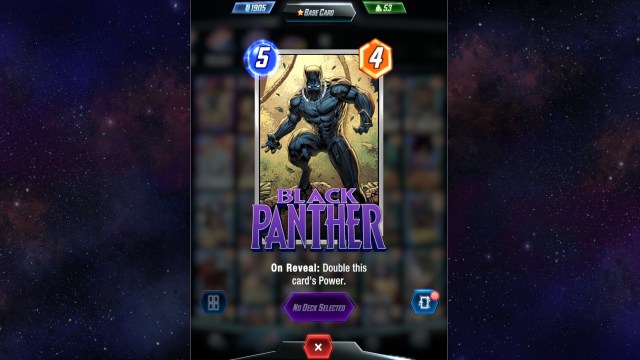 Screenshot via Marvel Snap Black Panther has shifted the metagame.

With Marvel Snap being out for a couple of weeks now, the metagame has started to settle. Here are the five Tier One decks in Marvel Snap according to Marvelsnapzone.com with explanations as to how they work and their win conditions.

This deck is named after the idea of “Miracle” decks in other card games. Those decks usually have one explosive turn in the game that leads the winning the game on the spot. Although Miracle decks usually focus on card draw, this one focuses on playing as many cards as possible in a single turn which is possible thanks to Sera; she is a five-cost card that can make cards in your hand cost one less. Play this card on Turn 5 and then play as many low-cost cards as possible on Turn 6 to win the game.

Destroyer is a polarizing card in the current Marvel Snap meta, thanks to its unreal 16-power on just a single card. The drawback is that on reveal, it blows up all of your cards at that location. However, with many cards that can bypass this ability, Destroyer decks are very meta-relevant. This version of the deck focuses on powerful ongoing effects that aim to win a single lane so that Destroyer can come down on Turn 6 and win another to seal the game. Spectrum, which buffs all ongoing cards, is a nice alternative win condition for the deck.

This powerful discard deck aims to abuse Apocalypse. Apocalypse is the strongest discard card in the entire game; not only does it replace itself every time it’s discarded, it doubles its power when it does too. The way to do this efficiently is to use Lockjaw, who has the ability to swap with any card in your deck once played. So essentially in this deck, you are going to get to resolve two discard effects for one in the mid to late game. If players are able to stick a Dracula on board with just Apocalypse and America Chavez in hand on Turn 6, you essentially win the game automatically as you are able to contest all three lanes on the last turn of the game.

Ever since the game came out, Wong has been meta-warping. With the ability to double on reveal effects, any strong card that can abuse this has been at the top of the metagame. The newest card in the game, Black Panther does just that. With Black Panther doubling its power on reveal, Wong essentially quadruples it giving players a free lane win on Turn 5. And with powerful Turn 6 plays like Arnim Zola, Doctor Doom and Odin, players can easily win two lanes every single game.

And of course, rounding out Tier 1 is the best destroy deck in the game. The deck plays all of the best destroy package cards with the win condition of course being Death. But what’s unique about this version are the disrupters. Wave, Aero and Magneto essentially throw the enemy strategies off guard. In a game like Marvel Snap where late games are pretty telegraphed, making sure the opponent can’t commit to their gameplan is very powerful; with Aero and Magneto moving opposing cards around, it makes it harder for opponents to win while getting easy snap calls for easy wins for yourself.