Interview with Ike: On using Hearthstone and HCT to overcome hardship

Interview with Ike: On using Hearthstone and HCT to overcome hardship 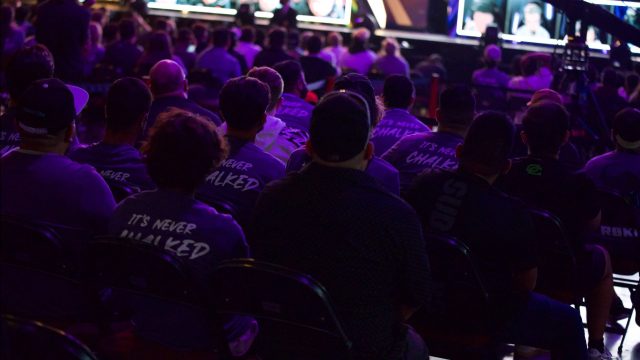 Competitive Hearthstone player Mark “Ike” Eichner is now duking it out against his opponents in the HCT 2019 World Championship.

When Ike first started playing Hearthstone in the competitive scene, his first HCT event was the 2017 Americas Summer Championship. From there, he competed in several other tournaments, and eventually joined up with Omnislash. Now in Taipei, he is going for both the crown and a prize pool of $1,000,000 USD.

His esports journey hasn’t always been an easy one, however, as he had to see multiple hospitals growing up.

“I was born with a bone disease, congenital pseudarthrosis of the tibia and fibula, which results in me being in and out of a lot of hospitals,” Ike said.

Despite the hectic schedule leading up to the HCT 2019 World Championship, Ike took the time to share his Hearthstone journey with us here at Daily Esports.

Daily Esports: How would you describe your Hearthstone esports journey so far?

Ike: I’ve had an amazing journey with Hearthstone esports. Competing in Hearthstone is tremendous fun and I always get an adrenaline rush during and after a series, but honestly, it’s all the people  I’ve met throughout HCT events that makes Hearthstone esports memorable and awesome. I owe some of my closest friendships and best memories to HCT events.

What were some of the challenges you’ve faced along your journey, and how have you/are you overcoming them?

I was born with a bone disease, congenital pseudarthrosis of the tibia and fibula, which results in me being in and out of a lot of hospitals. The silver lining is that it led me to Hearthstone and my HCT experience. Hearthstone helped me deal with even the most difficult times of pain, because it allows me to escape. I can focus all of my attention on the cards, no matter what’s going on — something you can’t do with every game. While it is important to accept your reality and circumstances when dealing with a chronic illness, you cannot let it define or control you. Hearthstone and my HCT experience has allowed me to express myself and compete at the highest level, something I didn’t always think was possible.

Before Hearthstone, you played a lot of League of Legends. What was it about esports that drew you in, and what made you want to play Hearthstone, in particular, competitively?

When you spend a lot of time recovering in a hospital bed or being on bed rest, you have a lot of downtime. I started playing a lot of video games to pass the time, and I soon realized that I picked them up pretty quickly. I’ve always been really competitive, so I would gravitate to games like CS:GO and League of Legends where there was a strong competitive scene. That eventually led me to Hearthstone, and esports felt like a natural progression, because it blended competition with my passion for gaming.

How would you compare your Hearthstone play style between when you first started and now?

My play style has remained pretty consistent throughout my career. I have definitely improved over the years, but I’ve always gravitated toward the midrange style of decks where I can either be the aggressor or defender.

What does it mean to you to be able to play in the upcoming HCT World Championship?

Participating in the HCT World Championship has been my career goal. This game and this community has afforded me with unimaginable opportunities, so I’m super excited to compete — and hopefully win!

What was your practice schedule and deck selection process like leading up to the championship?

My schedule has been pretty grueling. I want to perform well for my fans and myself, so I’ve been putting all of my energy into practicing and researching. I generally spend 12 hours a day practicing, trying to determine which decks have overall power, and analyzing how to make the best decks work together with a ban.

What is a memorable moment you’ve had with Omnislash so far?

Omnislash has a great roster of players and streamers. We all get along really well, so my most memorable moments with Omnislash always emerge at events when we are all together. It’s always unpredictable fun when we get in the same room, and I’m super stoked that the entire team — Pathra, Firebat, Zalae, and Kibler — is going to be at the HCT World Championship.

What are some cards that you enjoy playing in the Standard meta, and why those particular cards and decks?

I’m really enjoying Hagatha because she makes so many variables and is actually skill-intensive at a lot of points. Zilliax has been great too because of its utility.

What are some of your thoughts on the Rise of Shadows cards, and what are some cards that stand out to you?

Rise of Shadows overall has been very fun. The cards aren’t overly powerful to the point you wanna rage quit like Kathrena Winterwisp on eight. Sunreaver has really stood out to me, because of her potential and because of her power level being so high.

For your fans and community who are rooting for you to take home the crown at the HCT World Championship, what is something you would like to say to them?

I like Ike fans! And seriously, I really want to thank them for the support. It means a lot and I hope I do them proud.

I want to emphasize, too — with pain or mental troubles — that it is possible to achieve your goals through even the most difficult circumstances.

A big thank you to Ike for his time spent with us! As part of our Hearthstone coverage, we have also conducted interviews with players Torben “Viper” Wahl, David “Justsaiyan” Shan, Muzahidul “Muzzy” Islam, and Kacper “A83650” Kwieciński.