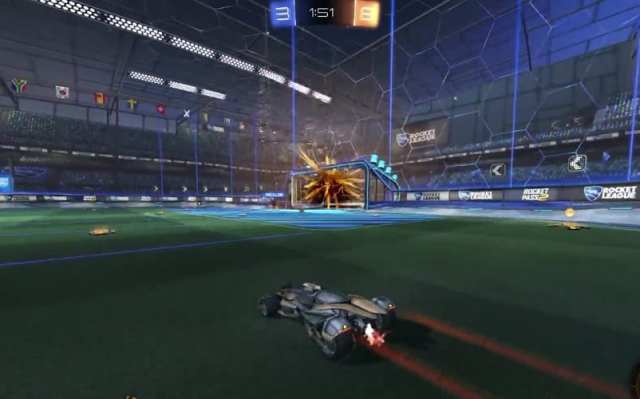 With matchday 14 behind us, we’re halfway through the league play section of the Mannfield Night 5K. Over the past two weeks, we’ve seen some amazing Rocket League match-ups since the start of JonnyBoi’s 1v1 League. John “JohnnyBoi_i” MacDonald is spoiling us with a tournament of great production quality every single day. You don’t want to miss the second half of league play, because the players have treated us to games beyond our expectations. With full focus and something real on the line, the eight contenders are bringing the scene to new heights and we wish we could show you every single highlight but you’d be watching dozens and dozens of clips. You’re better off simply watching the 14 games over on JohnnyBoi’s YouTube channel. The entire tournament is the highlight.

The MN5K standings after match-day 14.

As expected, Victor “Fairy Peak” Locquet topped the leaderboard with a 4-0 record in series. He’s won twelve games and dropped just two. Even on days where Fairy is challenged to finally lose a series, he always manages to pull it back in his favor. Fairy employs a combination of consistency and outrageous solo plays and his decision making and mechanical skill are equally flawless, which has made him into the obvious favorite to win the tournament. He pulls off moves consistently that most others only ever do by accident. As such, the storyline is obvious: who can defeat him and take the Mannfield Night 5K from under his nose?

😎 goal from the @JohnnyBoi_i 5K mannfield night tournament against @ScrubKillaRL ! Thanks again @gifyourgame for sponsoring this and letting all the 1s player get to show what they're capable of in a high level tournament ! pic.twitter.com/6jn5rGZpzs

There’s a clear gap between Fairy and the rest in 1v1 Rocket League, but that only goes to show how impressive Fairy is. The others are none to laugh at and would otherwise all have a solid chance at winning the tournament. That’s not to say they don’t now, of course. Fairy Peak is just playing the role of the overpowered villain excellently. A lovable villain, we might add – quiet, good-natured and incredibly fun watch. There’s no shame in rooting for the star-powered Frenchman.

What About The Rest of the Pack?

The biggest surprise, in our opinion, is Daniel “Bluey” Bluett. While he’s a well-known high-skilled 1s player, he hadn’t been extended a direct invite to the MN5K. And even though he qualified without a lot of issues, he’s not often named when people talk about the best 1s players in the scene. That said, Bluey has shown that he’s not only a player to take seriously, with beautiful, unexpected mechanical plays and very satisfying flicks, he is also one of the most entertaining players in the league.

Shot across the field like lightning and crashed this shot in the net like thunder. Huge booming ceiling shot double touch here from @BlueyRL. (via @JohnnyBoi_i) pic.twitter.com/8mVagwE2xH

Bluey is not the only one to pull ridiculous plays out of his hat, of course. We have the eight best 1v1 players in Europe, and each match has highlights that will make your head spin. The casual Rocket League fan might not know names such as Marten “Oscillon” van Zee and Dylan “eekso” Pickering, but that only shows how much of a different beast 1v1 is. They may not play in RLCS, but they are challenging the world’s top players in a different kind of competitive Rocket League.

The Outsider of the MN5K?

There are no real outsiders, of course. The players compete in this league for a reason. However, the bottom spot, occupied by Francesco “Kuxir97” Cinquemani at 0-3 is a surprise. Kuxir is a crowd favourite who is steadily on his way back into the conversation of top 3v3 players in the world. And while he started off this league against Fairy and Scrub, he also fell to Gabriel “OSM”. Now, there’s no shame in losing to OSM at all, but many were expecting Kuxir to be a little more dominant.

However, this does introduce another interesting storyline: Can Kuxir compose himself and come out ahead in his next games? A 4-3 record would most likely give him a good starting position in the gauntlet. As a 3v3 main, however, he’s up against non-RLCS players who can dedicate all their time to 1v1. It’s not going to be easy, but it’s definitely going to be interesting. Again, you don’t want to miss the rest of the tournament, but if you want more convincing, take a look at why you should be watching the Mannfield 5K in our previous highlight feature.

Want to catch the continuing action? Be sure to follow JohnnyBoi_i on Twitter and catch the matches live on his Twitch channel!