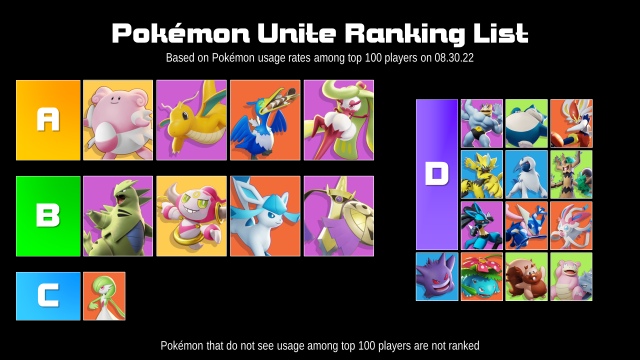 Provided by Maxwell Kappes Pokémon UNITE tiers based on usage among top 100 players.

The Pokémon UNITE anniversary celebration is about halfway over. Three new Pokémon have been introduced in Buzzwole, Glaceon and Tyranitar. Emblems have upended the Pokémon UNITE meta. But that’s not all: a new map, balance patches, another three Pokémon, and 51 more emblems are just on the horizon. Before the next major meta shift, where does the competitive scene stand as the fifth season of Pokémon UNITE comes to a close?

Below is the monthly moving average for the top 10 Pokemon:

An even playing field for the Pokémon UNITE meta

The tiers used in these articles are based on usage rates. D Tier is for niche Pokémon with no more than two users, while S Tier is for Pokémon with above 15% usage, making them nearly guaranteed to be used on every team in the high level meta. Since the introduction of emblems at the end of July there has not been a single Pokémon sitting in that tier. While many Pokémon have been getting closer, this is without a doubt the longest stretch of the meta without a commanding presence.

It’s not all Roselias and Butterfrees though: the actual variety of Pokémon in usage did drop this week. This update saw 22 Pokémon being used among top players, the lowest amount since early June despite there being three more Pokémon. With so many changes coming up though we won’t have to find out if this is a trend or a one-off though, the meta is about to seriously shaken up.

The return of the all-rounder meta

Early in Pokémon UNITE the all-rounder role was kind of a joke: only a handful of Pokémon with only Lucario seeing usage in the competitive meta. Now all-rounders are getting a large portion of newly released Pokémon and many of them are seeing high usage rates. Lucario has dropped to its lowest usage rate in its history but all-rounders are the meta. ADCs and speedsters have been replaced in the jungle by slow-burn brawler Tyranitar and objective-securing Dragonite.

In the past month the lifetime role usage average of all-rounders passed the early game domineering supporters, 25.2% to 25%. Attackers remain dominant though at 27.6%. All-rounders are gaining on attackers though: having had a higher weekly usage rate than attackers since June.  The introduction of Mew could change this trajectory, but unless ADCs or speedsters can reclaim the jungle from Tyranitar and Dragonite both roles will struggle to maintain their older relevancy.

Methodology: This data is collected using both the rankings tab in Pokémon UNITE and the Pokémon UNITE API. A Pokémon is considered a player’s “main” if it is the most played Pokémon in their most recent 16 ranked matches. In the event of a tie or near tie, the data will reflect that. When more than two Pokémon are tied, the 32 most recent matches will be considered instead.