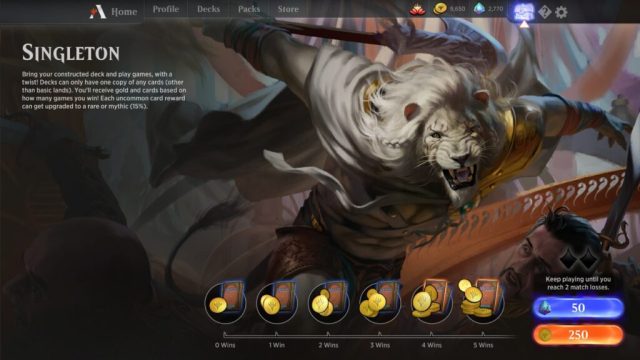 Magic: The Gathering Arena hosts new and interesting formats on a weekly basis. While these formats usually only last for the weekend, the current format, Singleton, extends through the week. I’ll be taking a look at these formats as they release, so let’s look at Singleton.

Singleton format consists of constructing a 60-card deck using only 1 copy of each non-basic land card. The cost of the event is 250 coins or 50 gems. I usually like to spend coins first as they are easier to replenish. The rewards for the event aren’t great, ranging from 50 gold and 2 uncommon cards for 0 wins up to 300 gold and 2 cards with at least 1 rare card and 1 uncommon for five wins. Once you lose two best-of-1 matches, you are knocked out of the event.

While this format doesn’t reward a ton for innovation, I find the weekly strange formats, Singleton included, to be a good refresher to step away from the ranked ladder grind. If you’re looking to become competitive in Magic: The Gathering, you’ll find it takes countless hours. Singleton is a good place to switch things up, learn new strategies, and look at the game from different angles while not being constrained to playing the best deck every game.

Singleton’s rule of only allowing 1 copy of each card creates compelling builds. While you will occasionally run into a Rat Colony or Persistent Petitioners deck, I found these decks to be less prevalent through my three runthroughs than in the beginning of MTG Arena. Mono-colored aggro decks flood this format, and there’s a reason for that. You want to build a deck that runs smoothly and consistently. Two and three-color decks can be built and played, but the constraints of only allowing 1 copy of each card means your mana base is a lot more unstable than in traditional Standard. Let’s take a look at a deck I had my friend, who is less experienced with Magic: The Gathering and Arena, build.

Newer players will want to build something comparable to this. Whatever you feel your color identity is, you can’t go wrong with a single-color aggro deck. We run into problems when we try to incorporate too many different approaches in a single deck. While more experienced players may look to branch out into crazy color combinations, decks like these are linear and run consistently. If you’re looking to branch out into multiple, try basing your deck in green. Mana-fixing cards, such as Urban Utopia and Open the Gates, allow you to hit your other colors regularly.

Surprisingly, deck building for my inexperienced friend only took about 15 minutes. Admittedly, I believed my friend would try something complicated, look at the mana, and become discouraged. He actually took the path of least resistance, decided a color he wanted to go, and rode it. He finished 2-2, losing both matches to Settle the Wreckage with lethal damage. While Singleton doesn’t have the crazy gameplay some of the other formats contain, it’s interesting to see the combinations people pull together for the format. He stated he enjoyed the playthrough though it did feel very similar to a normal game of Magic. As far as difficulty to build, play, and see decent results, Singleton is one of the easier rotating strange formats.

Singleton definitely has its ups and downs when compared to other weekly weird formats. It does appear more frequently than some of its crazier counterparts. If you find a deck you like to play, it may be worth saving the list until Singleton comes back. While gameplay is relatively simple, innovating Singleton and creating interesting brews becomes a much more challenging and thought-intensive procedure. Like most things in Magic: The Gathering, it’s easy to learn and difficult to master. Feel free to comment below with some of your favorite builds!