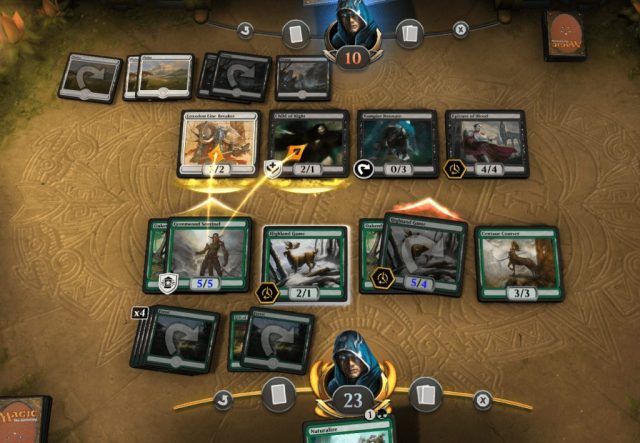 Competitive Magic: the Gathering has nearly always been played in best-of-three matches. When a recent update for Magic the Gathering Arena threatened to discourage that style, many of the MtG faithful cried foul at the action. Thankfully, after enough feedback from the community, developer Wizards of the Coast has gotten the message. The update will be delayed and reworked to satisfy player complaints.

The issue was brought up via the Magic: The Gathering forums when the recent new update for Magic the Gathering Arena was set to go live. In this update, changes were made to the Ranked System and rewards. Specifically, the Constructed Event Structure and Individual Card Rewards (ICRs) were affected.

Where Wizards of the Coast saw an issue with many player using the system in place to build decks rather than test their skills, the removal of ICRs altogether is what brought issue. Many players felt this made the game much stingier with card rewards. Certain characteristics of the changes also favored a best-of-one setting over the traditional best-of-three play. After enough feedback, Wizards of the Coast made a formal decision to reverse the update and delay it for a rework.

Today’s update has been delayed to address player concerns on Competitive Event reward changes. Thank you for your feedback. We will have a new update and more details soon!

An extended statement was posted by Community Manager Megan O’Malley on both the original update thread in the forum and on the Magic Arena Subreddit.

We’re going to be rolling back the proposed changes to our Constructed and Competitive Constructed Events. Rewards will be the same as they were before for these events. While we still intend to make changes to these two events at a later date to address concerns over the amount of new players entering them with the tutorial decks, we clearly missed the mark with this iteration. So it’s back to the drawing board for us.

As we announced earlier on Twitter, we’ve delayed today’s maintenance so we can roll back this change. Everything else that’s been announced is still planned to go live, and we’ll update you with the new maintenance time once it’s available.

MtG Arena’s first preseason will continue to roll through January 31, 2019 and further feedback is expected as Wizards of the Coast works its way towards a major year for the game. With a $10 million investment into esports and upcoming Pro League recently announced, it’s safe to say that WotC wish to lock down as much as they can and ensure a steady battleground for all comers.

Are you happy to see the new update rolled back for MtG Arena? Are they being too cautious? Let us know in the comments below!