Desik and Double61 also headline the five players from the EMEA region that will qualify for the TFT Dragonlands Championship. 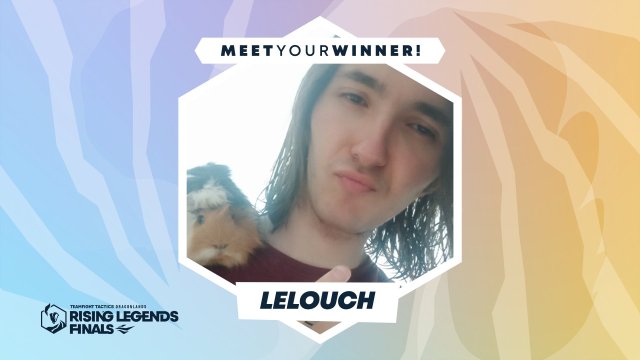 Provided by Riot Games Lelouch is the EMEA champion for the TFT Dragonlands expansion.

After breaking onto the scene during the Teamfight Tactics: Reckoning season, Nadim “Lelouch” Maani will finally be going to the world championship after capturing the TFT Rising Legends championship but his run to this point has been rough. This win was not expected. In fact, this entire year has been a nightmare of sorts for Lelouch.

That was an exciting weekend! We have crowned Rising Legends Finals Champion! Congratulations to @L2pLelouch 🥳🥳

With Europe, Middle East and Africa region being of historical importance for TFT, making it to the finals of the EMEA regional finals practically guarantees a player a spot in the world championship as five of the eight players automatically qualify for the main event. In contrast, two others get a shot at the Last Chance Qualifier. Meaning only one player will miss out on advancing completely. In Set 6 — Gizmos and Gadgets — Lelouch was the unlucky eighth player.

Wanting to forget about the past, Lelouch came into Set 7 — Dragonlands — wishing to show that he was worthy of a world championship spot. But his tournament performances leading up were not the best. At each of the three Golden Spatula Cups leading up to this tournament, Lelouch failed to make the finals each time finishing 21st, 19th and 23rd. But qualifying for each of the three GSC’s got Lelouch enough points to make it to the TFT EMEA Finals.

This one tournament could erase all the agony felt throughout the year for Lelouch. As 32 best players from across the region gathered, Lelouch could be the best player on this one patch, winning him the champion crown. Although he didn’t have the best Day 1, Lelouch turned on the jets in Day 2 to qualify as the sixth seed heading into Finals. He didn’t actually win a lobby in the six-game Day 3 Finals but he never got in bottom four. Showing that consistency trumps all, Lelouch edged out “Noel” by a single point to qualify for the TFT Dragonlands Championship and do so as the TFT Rising Legends: Dragonlands champion.

Rounding out the EMEA representatives, The TFT Galaxies Champion, Karmine Corp’s Emre “Double61” Demirtas will be heading to his third world championship as he looks to be the first two-time world champion.

Mathieu “L3S Coco” Nencioni is heading to his second straight world championship and will be looking to do better than his Day 1 exit from the TFT Gizmos and Gadgets Championship last season.

finally made it to the World Cup, I promise to play there better than today

Perhaps the biggest story of the tournament was Russian pro player Egor “Deisik” Popov finally qualifying for a world championship for the first time in his career despite being the number one player on the ladder consistently throughout the past couple of years.

Fabian “Salvyyy” Reichmann from Germany can also make his world championship debut but will first have to fight his way through the Last Chance Qualifier. Joining him will be Mohamed “Briks” Achraf Brik who will be looking to qualify for his first world championship too.

And of course, there is the odd man out. TFT pro player-turned analyst-turned pro player again “Sologersang” unfortunately finished last in the EMEA finals and will have his season as a player end. But could possibly be on the analyst desk for the TFT Dragonlands Championship later this month.