A highly-requested feature from the community might be coming soon 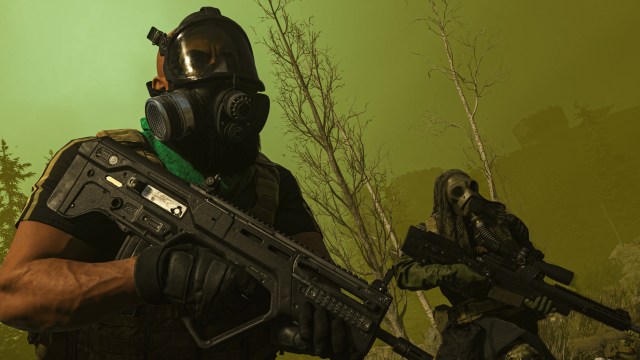 It seems that a popular fan request could soon be answered in Call of Duty: Warzone. According to a reputable leaker within the community, a manual gas mask feature is arriving in Warzone Season 4 Reloaded.

There’s no exact word on when Season 4 Reloaded will arrive, but fans should expect it by the end of July-early August. Season 5 of Warzone is set to begin on Aug. 24-25, and the mid-season updates usually arrive a few weeks before a new season launches. Of course, fans should take the gas mask leak with a grain of salt, as nothing has been officially confirmed by Activision.

As of right now in Warzone, players who find a gas mask as loot will have it put on them automatically when they’re in the gas. While this can be a good feature, as some players might forget they have a gas mask, it can lead to some frustrating situations. For example, if players are chasing an enemy who happens to go into the gas, they have to go through the animation of putting on a gas mask. This can often lead to players getting killed by the enemy they were chasing. By having a manual gas mask, players could choose when to trigger the animation and protect themselves from the gas or enemy players.

This leak comes from Reality on Twitter, who has been predicting accurate information about various Call of Duty titles for months. They’re a notorious data-miner within the community, so it could be they saw strings of code relating to a manual gas mask in the Warzone game files.

The manual gas mask is the latest in a series of leaks for the future of Warzone. According to another leak, Warzone will be getting a beta Ranked Mode in the next month or two. It seems unlikely that Season 4 Reloaded would deliver both a Ranked Mode and a new gas mask but it’s not impossible to rule out at this time. Fans will just have to stay tuned to hear about when Season 4 Reloaded could arrive and what innovations it could bring.