A finals matchup for the ages 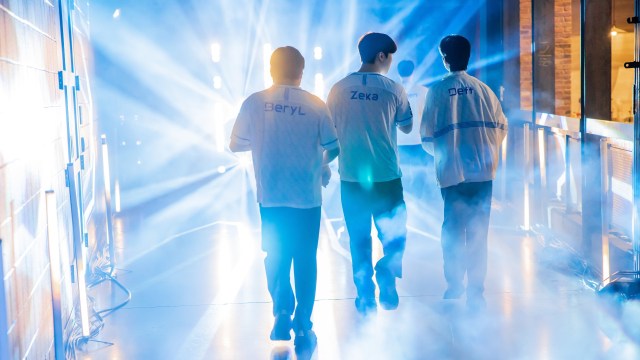 After a long 2022 season that has featured one of the best world championship tournaments of all time, League of Legends will crown the Worlds 2022 champion live on Saturday night from the Chase Center in San Fransisco, California. F

ans couldn’t have dreamed of a more exciting matchup. In the most unlikely finals possibly ever, one of the scariest teams from League Champions Korea in history will face off against a team that was merely an afterthought just three weeks ago. It’s DRX versus T1 for the championship. Here is an in-depth preview detailing how the teams got to this point and what each team needs to do in order to hoist the Summoners Cup.

After pulling off the first undefeated season in the history of the LCK, T1 took a small step back in the 2022 LCK summer split but still managed to easily finish second and entered Worlds 2022 as one of the tournament favorites. Since they have set foot in North America, T1 has been nearly unbeatable only dropping two games the entire month laying waste to three of the four League Pro League representatives and enter finals with an 11-2 game record.

On the other side of the bracket is a team that failed to even make the 2022 LCK summer playoffs and needed a reverse sweep with a substitute jungler to even qualify for Worlds 2022 as the LCK fourth seed. But against all odds since they arrived in North America, DRX took down Royal Never Give Up in the play-ins, then they took down Top Esports and Rogue in the group stage, then they reverse swept the reigning Worlds 2021 champions Edward Gaming in what many consider one of the greatest best of five matches of all time in the quarterfinals.

But once they matched up with the actual tournament favorites in the semifinals, their unreal run was meant to be over. But not even Gen.G could stop them. In fact, DRX had their most decisive victory in the entire tournament against the hardest opponent. After a 3-1 win, DRX are just one win away from making history.

As for head-to-head records between these two teams during the 2022 season, T1 does have a 8-0 game record against DRX which may or may not matter now.

You can pretty much throw being better on paper out the window. DRX have proven time and time again during this tournament that the skill gap between them and the perceived better teams is not an insurmountable feat. With that said, their entire roster has been playing out of their minds and are firing on all cylinders. Essentially if DRX continue to play like they are playing for their literal lives, it doesn’t matter who they go up against.

But when we do look at the paper matchups, if DRX are going to win this series they are going to need to rely on their bottom side of the map. Kim “Deft” Hyuk-kyu, Cho “BeryL” Geon-hee and Kim “Zeka” Geon-woo are more than capable of not only matching T1’s lane counterparts but also outplay them. If the top side of the map can just keep T1’s top side in check while letting their mid and bot lanes cook, DRX could definitely complete the greatest cinderella run since Taipei Assassins way back in Season 2.

Although it’s apparent Lee “Faker” Sang-hyeok wants to win just as badly as anyone else, the momentum that DRX can’t be matched. However, T1 has something DRX have, and that’s the skill advantage on paper. Credit to DRX for closing the gap in the mid and bot lanes, but that’s all they have done, just close the gap.

No one on DRX can match Faker’s experience in high-pressure situations and T1’s bot lane has been the best bot lane in the world throughout this tournament. If T1 can neutralize DRX’s strengths than this series is likely to be a wrap and we didn’t even touch on the top side where T1 has clear advantages. “Kingen” has held is own so far at Worlds but he hasn’t played against Choi “Zeus” Woo-je the best top laner in the world.

T1’s path to victory is clear, shutdown Zeka and the DRX bot lane while letting Zeus pop off on carry champions. If those two things happen, T1 and Faker will claim their fourth world championship.