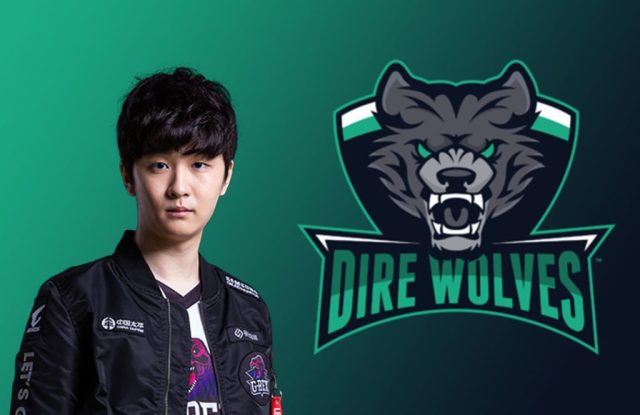 In a post on their official blog, the Oceanic Pro League’s Dire Wolves announced the signing of Korean League of Legends jungler Oh “Raise” Ji-hwan. The 21-year-old began his professional career with Team Roccat in Europe and later moved to Korea to spend two seasons in the LCK. Before joining the Dire Wolves, he spent some time in Taiwan with G-Rex and even played at Worlds with them. Raise will be the first-ever former LCK player to play in the OPL.

The team recently announced its long term strategy. They plan to run a ten man roster, which, based on experience, can be a double-edged sword. Furthermore, the strategy predicts the Dire Wolves developing homegrown talent with the help of their Dire Cubs sister team. It would supposedly mean the team would be competitive at the highest level at the same time as growing new talent.

Raise responded to the announcement after the signing. He wrote that he feels very honored to join one of the leading Oceania League of Legends teams. Additionally, he promised he will do his best to make it to Worlds 2019 and qualify for the group stage there.

Nathan “Rippii” Mott, Founder & CEO of the Dire Wolves, also commented on the recent acquisition. He expressed how dreamlike it feels to sign Raise after previously playing against him at the Worlds 2018 play-ins. Mott went on to further explain which qualities of Raise attracted them the most. He wrote that his leadership skills and his drive meshed well with the team’s strategy for the future. Lastly, he added that Raise’s English is quite strong due to him playing a year in Germany.

Making roster changes was a necessity after a catastrophic split for the organization. The Dire Wolves won four consecutive splits, the first being Split 1 in 2017. They represented Oceania in all international tournaments for the past two years, but they haven’t been successful, to say the least. In the past OPL split, the Dire Wolves found themselves bottom of the standings for most of the split. Only winning a single best of one match, the team missed the playoffs by a long shot. This brought an end to the organization’s domestic reign and called for serious changes in the team’s structure.

The reasoning for their decline lies in the departure of most of their players after last year’s Worlds. Brandon “BioPanther” Alexander, their top laner and a product of their Dire Cubs team, is actually the only player left from their championship roster. Only time will tell how well they do in the upcoming OPL split and if more roster changes will be needed.

For more League of Legends news, stay in touch with Daily Esports!