LCS wrapup: Fudge pops off in return to top lane

LCS wrapup: Fudge pops off in return to top lane 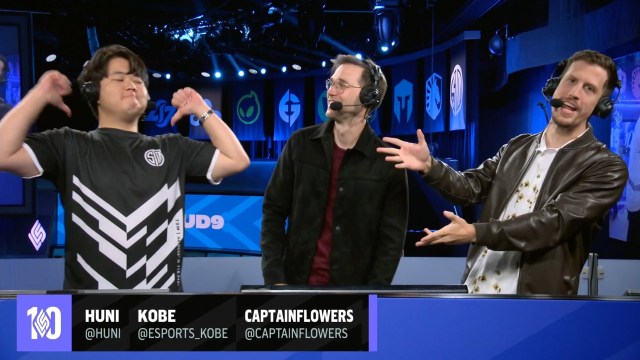 Screenshot via LCS Twitch Huni was without a doubt, the star Saturday despite not being actually playing.

After an extra week off, the 2022 League of Legends Championship Series summer split was back in the LCS Studio for Week 4 on Saturday with an interesting special guest on the broadcast and some crazy action on the actual Rift. Here are the top storylines and results coming out of Day 1 of Week 4 in the 2022 LCS Summer split, from a star showing by Cloud9’s Ibrahim “Fudge” Allami to a special guest on the analyst desk.

Player of the Day:  C9 Fudge

Cloud9 came into Week 4 of the LCS looking to continue to find their groove with their new roster, which included Fudge heading back up to his position in the top lane. If there ever was a performance to solidify the former all-LCS top laner’s form coming back it, was this one.

Fudge was a monster on Gangplank in C9’s match against TSM. With an incredible 8/0/8 KDA (kills/deaths/assists) stat line and 35.8K damage dealt to champions, there was no better player on the first day back in the LCS Studio than Fudge.

Most memorable moment: Huni on broadcast

This is the official Huni Cast Appreciation Thread #LCS pic.twitter.com/GTH0o1UmmK

After announcing that he was stepping down from the TSM active roster, top laner Heo “Huni” Seung-hoon, who has been a fan favorite over the years, might have played his last LCS game on stage. But the former world champion still got some facetime in the LCS Studio on Saturday.

As a special guest on Saturday’s broadcast, Huni spent the first half of the day on the analyst desk giving his insight as a professional top laner before and after each game. But when it came time for TSM to play against C9 with their new roster, Huni joined Clayton “CaptainFlowers” Raines and Sam “Kobe” Hartman-Kenzler to tri-cast the game live.

Fun times were, had even if TSM didn’t win the game.

This is the Alistar knockup that Creamcheese dreams of #LCS #PlayersTheSeries pic.twitter.com/uLftQgGlMr

Simply put, if you don’t understand this reference, go and watch Players now. This is not an ad.

Best Clip: Thanks for Leash

Greatest "Ty for leash" of all time #LCS pic.twitter.com/8lW3pCSc2o

Poppy has been a very popular jungle pick in the LCS as of late thanks to her fantastic mix of engage and anti-engage tools. But sometimes, her Ultimate ability can backfire, like this one by Evil Geniuses jungler Kacper “Inspired” Słoma.

Week 4 of the 2022 LCS Summer split concludes Sunday. All 10 teams in the league will play, with marquee matchups between Evil Geniuses and Team Liquid Honda as well as Counter Logic Gaming taking on 100 Thieves.

Matches start at 3:30 p.m ET live on the LCS Twitch and YouTube channels.