LCS Wrap-Up: Heartbreak and tiebreak on the final day

LCS Wrap-Up: Heartbreak and tiebreak on the final day

Thankfully there was only one tiebreaker game. 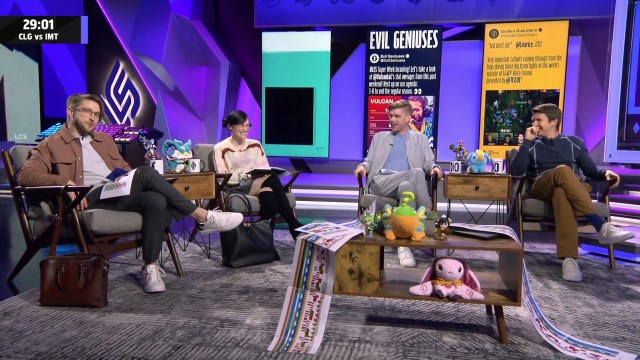 Screenshot via LCS Twitch The giant foldy sheet, with thousands of possible scenario, ended with the obvious one at the end of a wild LCS split.

After eight weeks, the 2022 League of Legends Championship Series summer split has decided the eight teams moving onto the postseason play. The very last day of the season gave fans many memorable moments and results as it is now time for the LCS Championship. But before that, Upcomer is here to give fans a quick rundown of the top moments in this Week 8 Day 3 LCS Wrap-up.

Player of the Day: EG Inspired

Although Evil Geniuses had already wrapped up a first-round bye, the team was still looking to continue their LCS dominance while preventing Cloud9 from continuing to climb the standings. In the last game of the split for EG, they were pushed to the brink by C9 in a very close back and forth game.

However, it was their superstar jungler Kacper “Inspired” Słoma, on Vi of all champions, that carried the game for EG. In what could of easily been a game-losing teamfight for EG, Inspired went berserk in a one versus three scenario to save the game for EG and, eventually, win the game to move EG to a franchise record 15-3 mark. Inspired picked up his third player of the week award and has pretty much locked up the LCS MVP as well.

In a battle between two teams with records that look like dates more so than games won and loss, the two teams definitely looked evenly matched. But with clutch teamfight almost 40 minutes into the game, GG locked in that last spot with a 5-13 record.

Palafox certainly looked like he had an extra hand on his keyboard in that game 😂 @palafoxlol | @clgaming | #LCS pic.twitter.com/BlPwDCygeh

It’s hard not to root for this Counter Logic Gaming roster. As a legacy organization making its revival, the team has been fun to watch on the rift in the 2022 LCS summer season, and the team has a lot of personality off the rift as well. Making sure that his mid-laner Cristian “Palafox” Palafox is on his a-game, Fatih “Luger” Güven offered to assist Palafox if he needed an extra hand to take down Immortals Progressive, spoiler alert, he didn’t need it but it was a nice gesture anyway.

What’s next in League of Legends

That wraps up the 2022 LCS summer split regular season. Next week kicks off the first round of the 2022 LCS Championship with four matchups spread across multiple days. Fans can catch the action live on the LCS Twitch channel.