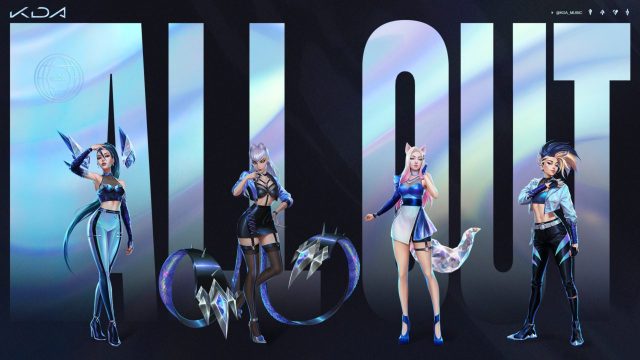 League of Legends‘ K-Pop supergroup, K/DA, has announced the release date of their debut EP. The EP, titled ALL OUT, will release worldwide on November 6, 2020.

K/DA is a K-Pop music group consisting of Champions from League of Legends. The group is made up of Ahri, Akali, Evelynn, and Kai’Sa. K/DA formed in 2018 and released their first single, “POP/STARS,” in the same year. The song had spectacular results, reaching #1 on iTunes’ K-Pop chart. To date, the music video for the song has over 340 million views, making it the most successful K-Pop debut in YouTube history.

After a long hiatus, their second single, “THE BADDEST,” came out in 2020. It made it to #1 on Billboard’s Digital World Sales Chart on the week of September 12. You can check out both of their songs on Spotify, YouTube, and iTunes.

Will there be more skins?

In 2018 when the group was formed, Ahri, Akali, Evelynn, and Kai’Sa all got special K/DA skins. While it hasn’t been officially confirmed, we can expect to see another K/DA event around the release of ALL OUT. The new album artwork shows the Champions in different apparel than what they wore in “POP/STARS.”

The release date of the album on November 6 aligns well with the end of the World Championship event, which gives League of Legends fans plenty to look forward too. A new K/DA event with all-new skins seems in order.

There is also Seraphine, a potential new Champion and member of K/DA. An event themed around the release of ALL OUT seems like the perfect time to release the K-Pop icon as a Champion in League of Legends.

Be sure to stay tuned for more on K/DA and give a listen to their debut album ALL OUT when it comes out on November 6. Let us know what you think about the most recent K/DA news in the comments below!