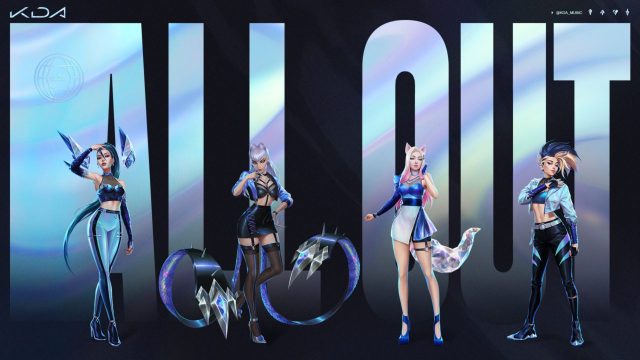 League of Legends’ virtual K-Pop group K/DA has released its first EP, featuring collaborations with music superstars on 5 brand-new tracks. The album’s release follows right after the end of this year’s League of Legends World Championship, where the group made a special appearance in its Finals ceremony.

We've been with THE BADDEST, you got a whole lot MORE, but now it's time to go #ALLOUT.

The long-awaited ALL OUT release

The ALL OUT EP is filled with nothing but catchy beats and lyrics. The songs each contain unique featured voices, including those of previous K/DA’s former guest singers Madison Beer and Jaira Burns. The tracklist also contains the group’s pre-release single “THE BADDEST” alongside its featured track “MORE.” After months of waiting, fans of K/DA now have the chance to listen to the new album on all major streaming platforms for free.

The tracklist of ALL OUT features guest appearances, such as:

Additionally, Seraphine is featured on “MORE” and sings her verse with a mix of Chinese and English, a different take from the group’s usual Korean and English lyrics.

A short history of success for K/DA

Over time, K/DA made its mark in 2018, debuting its number one top-charted single “POP/STARS” with over 170 million streams. The collaboration began with MIYEON and SOYEON from (G)I-DLE, Madison Beer, and Jaira Burns reaching over 340 million YouTube views. The group’s newest track “MORE” has reached over 28 million views on YouTube, reaching similar heights to when “POP/STARS” first released.

Riot Games has not provided any more information as to any future projects involving K/DA. In the meantime, fans can look forward to listening to the new album while reading the recently-released K/DA comic series.