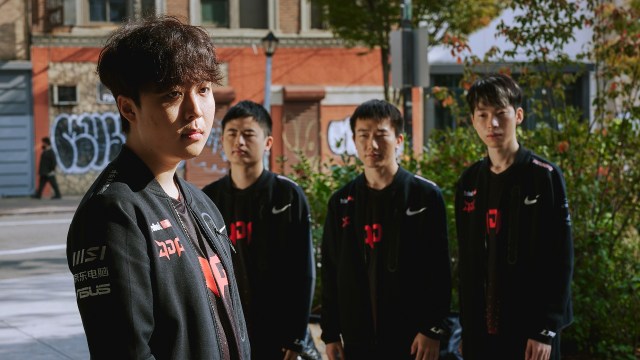 It was the result that everyone, except for the Europe faithful, expected. The League of Legends Pro League champions JD Gaming walked over the League European Championship champions Rogue in the quarterfinals at Worlds 2022. The west’s hope is no more. In fact, it’s JDG who has Wang “Hope” Jie.

A man of his words

The last hope of Europe is down

Game 1 saw Rogue put up some sort of fight in the early game with the team at least remaining competitive in the kill department and keeping the gold close until the 24-minute mark.

But a critical fight for the fourth dragon opened up the game for JDG. Rogue managed to take the dragon but paid for it with three of their lives which allowed JDG to take Baron and build an insurmountable lead. JDG ended the game just a couple of minutes later.

Game 2 was rough for Rogue as they got behind early in the bot lane. But just like in Game 1, they at least kept the kills close. Unfortunately for them, kills don’t equate to winning in League. At the 24-minute mark, JDG only held a 7-6 kill lead but had a 6k gold lead. JDG played it safe and just waited for objectives like Baron to respawn.

And with Rogue unwilling to contest, JDG took Baron at 28 minutes and that combined with their massive gold lead, JDG ended the game right after.

Game 3 saw Rogue put up a real fight. There was not a single fight or decision early that opened up the game. In fact, 30 minutes in the game was relatively even. For the first time not only were the kills even, but the gold was practically even too. JDG still managed to hold small advantages but of course JDG were inevitable. It didn’t matter if the gold was even, in a teamfight JDG couldn’t be stopped. In 33 minutes, JDG pulled off the sweep.

JDG did not struggle in the slightest as they made quick work of the LEC one seed and showed the gap between the east and west is growing. The lone western team in the Top 8 at Worlds 2022 has been eliminated in the first round of the knockout stage.

Rogue’s Worlds 2022 journey has come to an end

Rogue has plenty to be proud of as they head back home to Europe.

Rogue’s 2022 has been a massive success. After finishing first in the LEC 2022 spring split regular season, the team managed to place second in playoffs. They responded in the summer split by shaking off a less-than-steller regular season by qualifying to Worlds 2022 after defeating the summer regular season champs MAD Lions and ended up getting revenge against G2 Esports by sweeping them in the finals to qualify as the European champions.

At Worlds 2022, the team played phenomenally in Week 1 by sweeping their competition which included one of the Worlds 2022 favorites, Top Esports. In Week 2 they didn’t play as well as the wheels started to fall off but still managed to be the lone western team to qualify for the quarterfinals.

JDG will continue their Worlds 2022 run next weekend in Atlanta, Georgia at the State Farm Arena as they wait for the victor of the 2022 Mid-Season Invitational rematch between T1 and Royal Never Give Up.