G2 and EG have officially been eliminated 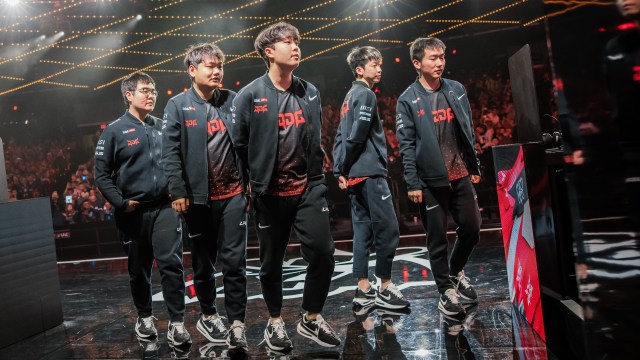 After G2 Esports loss to DWG KIA, Group B at League of Legends Worlds 2022 has now been decided. JD Gaming and DK have mathematically locked their spots into the knockout stage while G2 and Evil Geniuses have officially been eliminated. With DK and JDG having at least three wins, G2 and EG can no longer match those totals which has meant their elimination.

EG came into Worlds 2022 with a sub with their main bot laner Kyle “Danny” Sakamaki taking a break from professional League due to mental health reasons. Muhammed “Kaori” Şentürk was promoted at the end of their League Championship Series playoff run. And despite the very short notice, EG managed to make it through play-ins by 3-0’ing the League European Championship fourth-seed MAD Lions to earn the last spot.

They were rewarded by being placed in a group of JDG, DK, and G2. In Week 1, EG were competitive in all of their games but still managed to lose all three of their matches putting their backs to the wall heading into Week 2. Signs of hope were given as EG opened up Week 2 with a dominating victory over G2 to keep their hopes alive.

But after a loss to JDG in their second match, their knockout hopes were put onto the team they just beat, G2.

Evil Geniuses have officially been eliminated from #Worlds2022 contention. pic.twitter.com/89wCfG6SZ3

G2 have also had a poor Worlds 2022 performance. As the LEC second-seed, G2 came into group stage as a favorite to make it out of the group but with their lone win in Week 1 coming against EG, they also were backed into a corner to kick off Week 2. And with a loss to EG to begin the second round robin, G2 were put into a must-win against DK.

Unfortunately, G2 could not get the job done even with a unique draft that saw Marcin “Jankos” Jankowski play Bel’Veth. Speaking of Jankos, this is now the first time Jankos has not made it to the semi-finals of Worlds in his entire career.

JDG already locked their spot in the quarterfinals after their win against EG. The win put them at 4-0 and since only one other team could potentially match them with G2 and EG already having at least three losses, they will move on not matter what the results are in their next two games. They are only playing for potential seeding at this point. DK will need to either beat JDG or have JDG lose their last game to be able to force a tiebreaker for seeding.