'It was a pretty exciting experience': Kaori shines in LCS debut for Evil Geniuses

‘It was a pretty exciting experience’: Kaori shines in LCS debut for Evil Geniuses

Due to unfortuntate circumstances with Danny stepping down for a mental health break, rookie bot laner Kaori stepped up in EG's loss against 100 Thieves and will likely be the teams starting bot laner at Worlds 2022. 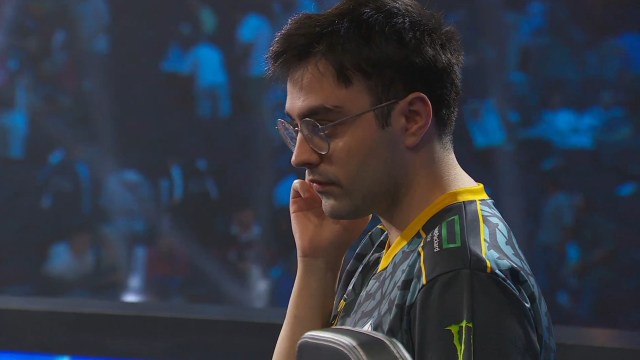 A week ago, sub Muhammed “Kaori” Şentürk was watching Evil Geniuses take down Team Liquid Honda in an emotional five-game thriller that sent EG to Worlds 2022 and to Chicago for the League of Legends Championship Series Finals. In the week following, Kaori’s life changed.

After superstar bot laner Kyle “Danny” Sakamaki stepped down from the starting roster due to a mental health break, Kaori was promoted to fill his shoes. With Worlds 2022 seeding on the line, Kaori made his LCS debut in the third place match against 100 Thieves in front of thousands in person at the United Center and hundreds of thousands at home.

Although EG dropped the series in a close five games, Kaori outperformed everyone’s expectations giving EG fans hope that the team will be alright in Danny’s absence. And with the coaching staff confirming that Kaori is the “probable” starter for the team at Worlds 2022, his performance wasn’t just exceptional, it was vital.

After spending the first four years of his professional career in Turkey, Kaori was picked up by EG in the 2022 offseason to be their new academy bot laner. Kaori was following in the footstep of other Turkish players who have found success in North America including 100 Thieves jungler and LCS champion Can “Closer” Çelik who Kaori just went up against.

In a high-pressure series where all nine other players have been in these positions before, eyes were on the rookie Kaori to see if he would fold under pressure. Instead in Game 1, Kaori folded 100. Piloting Lucian, Kaori was the main factor behind EG’s Game 1 victory making aggressive plays that netted him a 9/2/7 KDA in his first ever LCS game. He had another steller Lucian game in Game 3 going 7/0/4 and putting EG on match point.

But with not-as-good games on Sivir in the final two games of the series, EG bowed out of the summer season in third place. Combined in the five games, Kaori put up a 22/9/15 statline which is fantastic for a debut, let alone one in this sub-optimal situation.

In the post-game press conference, the team mentioned that with Danny’s wishes to step down from the team, Kaori had very limited time to play with the main roster. In fact, EG’s support player Philippe “Vulcan” Laflamme”Vulcan” mentioned that Kaori had only played in “less than 10” scrims before the big match against 100 Thieves. The coaching staff tried their best to figure out the best game plan possible ahead of time.

“When we were with Danny he had exceptional champions that he played well so we tried to adjust to his preferences,” EG head coach Han “Rigby” Earl said. “But with Kaori we were actually going for what we think is right generally, so it was like a pretty exciting experience for me.”

Across the 2022 summer Academy season and Proving Grounds, Kaori played 12 different champions. While that number is only two higher than what Danny played over the same season, the champions Kaori played on top of the ones that Danny played included lane dominators like Draven and of course, Lucian.

When looking at the differences between the two different bot laners at EG’s disposal, Vulcan noted that while neither Danny’s or Kaori’s playstyles were necessarily better, both had different strengths they bring to the team.

Shoutout to @KaoriLoL for smurfing on such short notice

See you guys in playins

“Danny is more happy just scaling for late game and going even and just farming as much as he can and play for team fights,” Vulcan said. “Whereas Kaori will try to play more aggressively in lane from minute one.”

Now with EG confirming their spot at Worlds 2022 in the play-in stage in Mexico City as the LCS third seed, Vulcan mentioned that the team just needs to play more with Kaori, and while the hope is to make it through to the group stage. Kaori mentioned that one of the biggest takeaways that he took from his debut was playing in front of crowds. And while EG will have the crowd behind them if they make it to New York City for the group stage, Vulcan said that’s only if the team makes it that far.

“I’m not thinking about New York yet because play-ins are not that easy to make out of this year. We actually need to take it seriously,” Vulcan said. “And I don’t think we have home field advantage in Mexico.”