Is Jun Kazama in TEKKEN 8?

Is Jun Kazama in TEKKEN 8?

27 years in the making 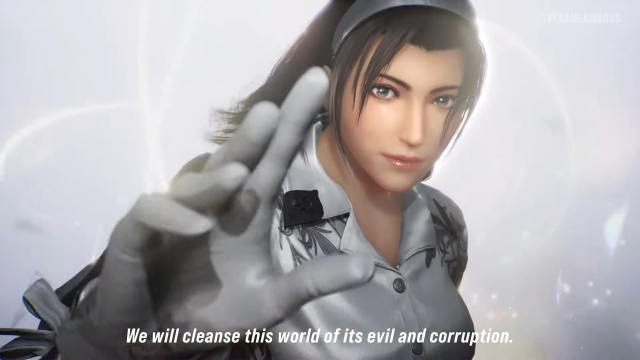 Provided by Bandai-Namco Jun Kazama is in Tekken 8.

Tekken fans all over the world were delighted when the official story and gameplay trailer of the newest title, Tekken 8, was shown off at The Game Awards on Thursday night.

The new trailer gave fans a first look at the events that would be unfolding after the conclusion of Tekken 7 which included some character reveals and another look at gameplay that hasn’t been seen since the initial teaser that showed up back in September during one of the Playstation State of Play presentations.

Although the usual suspects did show up in The Game Awards trailer, one character specifically turned heads. Here is what we know about the possibility of Jun Kazama being in Tekken 8.

During the initial Tekken 8 teaser trailer shown off during the Playstation State of Play, it was made apparent that the two main characters in the newest Tekken 8 title would be Jin Kazama and Kazuya Mishima. That was expanded upon during The Game Awards trailer which showcased the two characters heavily once again.

When it comes to the history of these two characters, Jin Kazama is the son of Kazuya Mishima and the two are looking to kill each other in what seems to be a battle between good and evil but the interesting thing to note in the trailer is that Jin calls out to his mother saying “Mother…I still can’t protect anybody!”

The mother he is referencing in this quote is Jun Kazama who has been presumed dead since Tekken 2 and has not been a playable character since that game came out back in 1995. She has made a cameo in Tekken Tag Tournament 2 but not as a playable character, also that game is not canon to the main story.

Father. Son. Mother. This family reunion is going to be explosive.  #TEKKEN 8 is bringing back old grudges to the new generation – Kazuya, Jin, Paul, King, Law, Lars, Jack-8 and… the return of Jun Kazama!

Get ready for the next-gen battle! pic.twitter.com/MoMqlNWSbt

However, in the trailer, Jun Kazama appears on screen multiple times and even says, “We will cleanse this world of its evil and corruption.” This implied that not only is she alive, but she is going to be a significant part of Tekken 8 and, of course, be a playable character. It has been 27 years since Jun Kazama showed up as a playable character in a Tekken game making this reveal special in many ways.