Is FPX's collapse at Worlds 2021 one of the worst of all time?

Is FPX’s collapse at Worlds 2021 one of the worst of all time? 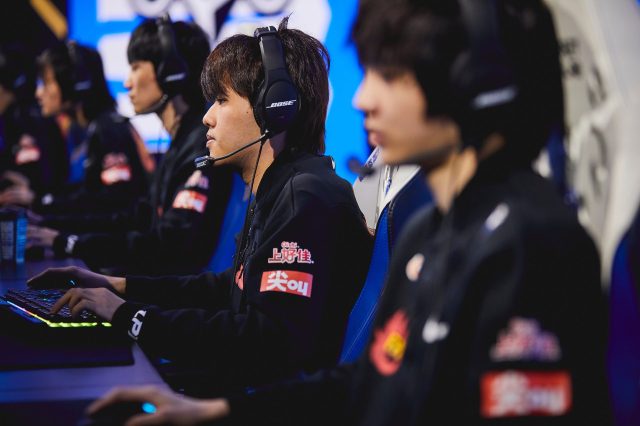 Photo by Lance Skundrich/Provided by Riot Games With a 2-1 record entering the deciding day of Group A, FunPlus Phoenix looked shaky but poised to advance. That's not how it went down for the 2019 world champions.

FunPlus Phoenix’s tragic 0-4 run on the final day of Group A at the 2021 League of Legends World Championship came as a surprise to FPX fans and Worlds 2021 analysts alike. The League of Legends Pro League’s second seed entered the Group Stage as not only a favorite to advance to the Knockout Stage, but also as a top pick to run away with the entire tournament.

FPX aren’t the only championship caliber team that’s failed to live up to the expectations placed on them entering Worlds, however. In past years, former world championship rosters like Gen.G in 2018 and domestic giants like TSM in 2016 and LGD in 2015 have either stumbled at the finish line or failed to take off at Worlds from the start.

Upcomer’s staff compiled a list of some of the most disappointing runs at Worlds from teams that seemingly had what it takes to take home the Summoner’s Cup.

FunPlus Phoenix had five world champions on their team, including the reigning top lane world champion, Jang “Nuguri” Ha-gwon, who they acquired in the offseason. Despite a shaky spring, they turned it on in the playoffs and finished second. FPX came into the summer split looking like the premier team in the LPL. Throughout the summer split, FPX was near the top of the standings the entire time. In the playoffs, they looked unbeatable. In fact, until the finals, FPX didn’t even drop a game on their way there. But in an unexpected result, FPX dropped the finals series against Edward Gaming in 3-1 fashion that realistically should have been a 3-0.

That was the real start of FPX’s collapse. Still, with Worlds ahead, everyone thought FPX would just bounce back.

Worlds 2021 should have been a cakewalk for FunPlus Phoenix, and their matchups against DWG KIA were an intriguing hypothetical final preview. But in both of their games, DWG KIA destroyed FPX.

After looking shaky in their win against Cloud9, FPX finished the first half of the double-round robin with a 2-1 record. Again, many thought they would turn it around in Week 2, or at least stabilize enough to stay at second in the group. Then, the once unbeatable monsters of the LPL had the arguably worst performance in Worlds history during their second round-robin, losing all three games in Week 2 and then getting smashed in the tiebreaker game against Rogue.

The loss led Cloud9 to the knockout stage in what would have been FPX’s spot if they had picked up just one win on the day during non-tiebreaker play.

The previous year, Gen.G (then Samsung Galaxy) won the Summoner’s Cup. Although they weren’t the odds-on favorite to win it all in 2018, that weight of responsibility on the shoulders of KT Rolster, they were shoo-ins to make a deep run. At the very least, with the tournament held in their home country of South Korea, a place in the knockout rounds all but assured.

In a group with fellow tournament favorite Royal Never Give Up and two Western teams in Team Vitality and Cloud9, their advancement seemed certain. Gen.G played the textbook South Korean League of Legends style, in where they’d scale up into the late-game to win through superior objective control and five-on-five teamfighting.

In 2017, that defensive, counterattacking style led them to ultimate glory. In 2018, their late-game focused tactics became obsolete, Team Vitality lighting the fuse of a faster, wilder way of playing League of Legends that punished the way Gen.G saw the game.

While other teams like Invictus Gaming, Fnatic and Cloud9 thrived in this meta, Gen.G became relics of a bygone era.

They imploded instead of adapting, ending the group with an overall 1-5 record and the first South Korean team to fail to make it out of the modern group stage format implemented in 2014. Worst of all, their collapse occurred in front of a hometown crowd in Busan.

After a first-place finish in the 2017 League of Legends Pro League summer split regular season, followed by an intense reverse-sweep series win in the LPL final against Royal Never Give Up, Edward Gaming fell completely flat on the Worlds stage. Their LPL final victory sent them to Worlds 2017 as the first seed for the region, but they only put together two wins in their group.

Somehow, EDG failed to advance in a group with the League Championship Series third seed in Cloud9, the League of Legends Master Series second seed in ahq eSports Club and League of Legends Champions Korea second seed in SK Telecom T1. Despite being the first seed, they definitely had some concerns going into worlds, and those issues reared their heads in the first round robin when EDG failed to close games with 10,000 gold leads, including one where “Faker’s shockwave will find them all.”

EDG almost made the 3-0 run in the second round robin but failed to find their last game against SKT, ending their Worlds run at 2-4. They weren’t favorites to win the whole thing, but collapsing so miserably in groups after getting ahead in so many early games against what should’ve been much weaker opponents was a huge failure.

TSM’s collapse at the 2016 League of Legends World Championship could quite possibly be one of North America’s biggest international blunders. Period.

Even taking into consideration the 2019 Team Liquid squad that failed to make it out of groups at Worlds 2019 after beating the championship Invictus Gaming roster at that year’s Mid-Season Invitational, 2016 TSM takes the cake. You see, this was a North American team receiving credit from analysts heading into Worlds as a team that could potentially make the final.

The iconic lineup of Kevin “Hauntzer” Yarnell, Dennis “Svenskeren” Johnsen, Søren “Bjergsen” Bjerg, Yiliang “Doublelift” Peng and Vincent “Biofrost” Wang terrorized the League of Legends Championship Series. Analysts were quick to call their group the “group of death” as it consisted of favorites Samsung Galaxy and Royal Never Give Up.

The thing is, TSM was actually able to go toe-to-toe with them at the tournament. That is, until Doublelift made his iconic blunder into Lee “Crown” Min-ho’s Viktor which cost TSM a crucial qualification-deciding match in the group. The rest is history.

After winning the LPL summer split playoffs and placing fifth in the regular season, LGD Esports came into the 2015 World Championships as a decent favorite to make the knockout stage and contend for a title.

The then-LPL first seed came in with a team centered around 2014 Worlds champion Gu “imp” Seung-bin and 2014 semifinalist Choi “Acorn” Cheon-ju. With the spirit of both Samsung teams from the previous years, many slotted the team in as a decent contender. But those expectations fell flat as the team only managed two wins and bombed out of the tournament.

They came into the tournament with three losses across the opening days, losing to Origen, TSM and KT Rolster. The scrappy LGD that seemed to turn it on for high-stress games like the LPL playoffs absolutely crumbled on the world stage, as many of its carry players looked lost on the rift. The most lost out of the entire team was Acorn, who was subbed out for a few games for longtime veteran Lee “Flame” Ho-jong in hopes of cobbling together a decent showing in the second half of the Group Stage.

Unfortunately, LGD continued to embarrass themselves as the individual players kept falling apart in lane and team coordination went out the window as their tournament hopes faded away. The team’s mid laner at the time, Wei “GodV” Zhen, was labeled GoldV by fans  in reference to his supposed rank after his performance at the international event that year. LGD cobbled together two wins in the second round robin, but damaged the LPL’s reputation as a top league for at least that year.

Six years have passed from this meltdown, and only one player from their starting squad is still actively competing.

2014 is a year that European fans would generally like to forget in regards to Worlds, as it was the only Worlds that did not feature an EU team in knockouts (2021 still pending). Alliance made history in the EU LCS, being the first team to break Fnatic’s sheer dominance to win the summer season and qualify for Worlds as EU’s first seed. It looked like mid laner Henrik “Froggen” Hansen’s “superteam” project was finally paying off.

As they say, heavy is the head that wears the crown, as Alliance was expected to spearhead EU’s campaign in Worlds 2014. In all honesty, they didn’t start off that poorly. The first round robin ended with them at 1-2, with a close game against NaJin White Shield. Things looked hopeful for the second round.

Alliance defeated Cloud9 in the rematch and even defeated NaJin White shield in a perfect game. But rather than being remembered for their perfect game against NaJin, Alliance’s journey at Worlds that year would be immortalized by their loss to KaBuM! e-Sports, Brazil’s representatives. Top laner Mike “Wickd” Petersen’s Kayle pick in that game came under much scrutiny as Alliance lost that crucial game, one that was regarded almost as a write-off for EU’s champions.

After getting “KaBuM-ed”, Alliance ended the group stage at 3-3, not enough to force a three-way tiebreaker with Cloud9 and NaJin who ended the group stage at 4-2. With Fnatic and SK Gaming also not managing to advance from groups, EU as a whole had a Worlds to forget. Alliance then rebranded to the infamous Elements, bought Martin “Rekkles” Larsson from Fnatic and continued on with mediocre to less-than-ideal results into 2016 spring before being bought out by FC Schalke 04. Thus ends one of the stranger legacies of EU’s often forgotten champions.