"I'm impacting the team the most": Faker lets T1 teammates shine but is still the GOAT at Worlds 2022

“I’m impacting the team the most”: Faker lets T1 teammates shine but is still the GOAT at Worlds 2022

Faker is no longer the best player in the world, but with his guidance, his young teammates are 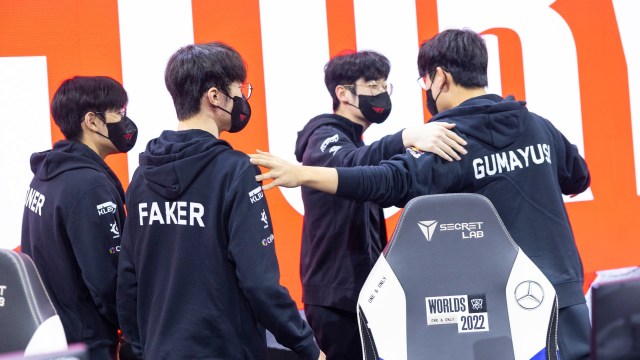 The days of T1’s legendary mid-laner Lee “Faker” Sang-hyeok being in the conversation of the game’s best current stars are over. It has been for a couple of years now.

Simply put, the new generation of players has grabbed the spotlight away from the undisputed goat of League of Legends. And that’s even apparent on his own team. But its because of the new generation of talent on T1’s current roster that this year may ironically be Faker’s best bet to win his fourth Worlds title that has eluded him for the past five years.

But don’t get it twisted. Just like Faker’s performance on Akali in the Worlds 2022 quarterfinals, he is still able to command games from the shadows.

Faker is in year 10 of his unparalleled League career and, throughout it, he has played with many different players of varying amounts of experience. But this current team is by far the youngest.

That said, just because they are young doesn’t mean they are not good. In fact, the players he is surrounded by have already been claimed by many to be the best in the world at their positions. T1’s top laner Choi “Zeus” Woo-je is just a rookie but is heralded as the world’s best top laner. When looking at their bot lane even, the duo of Lee “Gumayusi” Min-hyeong and Ryu “Keria” Min-seok are up there in the rankings as well. The stars on this team shine brighter than even Faker himself nowadays.

But he doesn’t mind at all. In fact, he’s happy to share it.

“It doesn’t actually matter to me who receives the spotlight, it’s not important to me,” Faker said. “But I do think it’s really good that there are various players who are able to perform in a diverse way to get that spotlight.”

One word that many use to describe Faker is “wise.” His storied career has given him an endless amount of wisdom that he can now share with his young teammates. When it comes to an example of what that looks like, there is a reason why T1’s playmakers are able to step up without hesitation.

“I just wish for my teammates to be free and have their own ability to make their own decisions,” Faker said. “Since we’ve come to Worlds, I told them that as long as we keep calm and make sure we’re careful enough, we can win against anyone.”

So far, the team has pretty much won against everyone. In both the group stage and the quarterfinals, T1 have looked nearly unbeatable only dropping a lone game against Fnatic so far. A big part of that is the team stepping up on the big stage. But while the team around Faker is a big reason behind their success, even in the series against RNG in their Game 2 comeback — where the team turned the game around at Elder Dragon — it was Faker being the consistent rock the team needs making the play happen.

This is still Faker’s team and his teammates know that when they need their leader the most, he is there. Faker is not only there for clutch plays and advice, but also for inspiration.

“If you think about it, I’m maybe impacting the team the most,” Faker said. “Everyone surrounding me kind of looks up to me especially because I’m the captain of the team. That’s why I think I put even more effort to show a better version of myself and make sure that I’m available whenever they need me for help.”

Although Zeus playfully said in the post-game interview that Faker has this aura around him, it’s just a sign of respect. The power emitted from Faker can be attributed to his motivation. Faker has said many times before that his primary motivation is to win and right now his aura is powerful. But although he gives off lot of pressure, in the past Faker said that he has also felt pressure within. However, at Worlds 2022, it’s just a one-way street.

“I feel like, in the past, there were a couple of times where I felt pressure but now that I can actually overcome that on my own, now I get even more excited,” Faker said. “When I play, I play off of those really positive, optimistic emotions.”

The optimism comes from the team around him which is filled with the newest generation of world-class talent. A new age of T1. Faker is now 26 years old. The next oldest member on his team is 20. Faker has definitely felt the effects of his old age, in esports that is, catch up to him, especially by his young teammates who grew up actually watching Faker pioneer the very esport they are playing right now.

Despite the age gap, there is one important and obvious thing that keeps this team close and hungry to take on all challengers.

“I actually feel the age gap in many different ways in like our living habits and daily lives,” Faker said. “But lately, we’ve been focused on the game and discussing game-related things that I honestly end up forgetting about our age gap.”