"I think it will be us and EDG": Fnatic's Upset is feeling good at Worlds 2022 group stage

“I think it will be us and EDG”: Fnatic’s Upset is feeling good at Worlds 2022 group stage 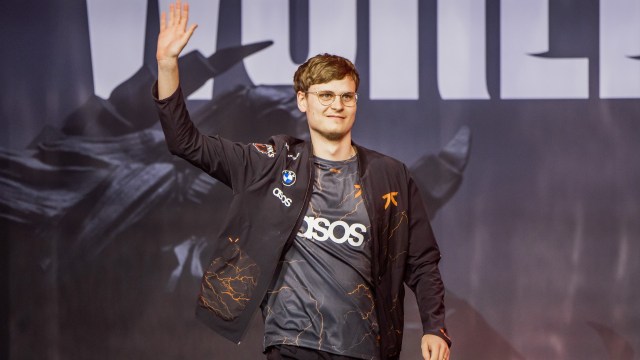 Even though the classic “hope for North America” hasn’t shown up so far at Worlds 2022 with Cloud9 now 0-3 in the first half of the League of Legends Worlds 2022, the European staple Fnatic has been the surprise of the event so far finishing 2-1 in the first half of the group stage with a win over C9 themselves — but also the League Champions Korea representatives, T1. Despite being the League European Championship third seed and having to play through team turmoil and the play-in stage, Fnatic bot laner Elias “Upset” Lipp has been anything but.

Those circumstances have been quite tough on Upset and Fnatic so far at Worlds 2022. For the second straight year, Upset’s chance to play on the world’s stage was in jeopardy although for different reasons. Right before the team was set to head off for Mexico City for the Worlds 2022 play-in stage, Upset and his support Zdravets “Hylissang” Iliev Galabov contracted COVID-19 and could not even fly to Mexico City as a team. With both players sick in Europe, Riot Games had to grant an emergency sub to Fnatic as there was a real possibility that neither of the starting bot lane would make it in time for the start of the play-in stage.

Luckily for Upset, he arrived just in time for the first game but Hylisang was forced to wait until Day 2. However, the downside was that the team had virtually zero practice time together and their starting bot lane was still coming off of an illness. Upset didn’t use any excuses though. Instead, he led Fnatic to a 4-1 play-in stage and helped lead his team to a shocking 2-0 start to the group stage featuring some of the best bot lanes in the entire world. Even Upset didn’t expect things to be this good.

“Even though we couldn’t scrim as much as the other teams I think we are competitive with other teams,” Upset said. “Maybe it’s not necessarily surprising but I am kind of surprised.”

Group A of Worlds 2022 is home to T1, Edward Gaming, C9 and Fnatic and all four teams have legitimate claims that their team has the best bot lane from their respective regions. And through the first three games, it’s hard to argue that Fnatic’s isn’t up there among the world’s best. According to Oracleselixer,com, through the first three games Upset, EDG’s Park “Viper” Do-hyeon and T1’s Lee “Gumayusi” Min-hyeong have near identical KDA’s and damage-per-minute stats.

With that said though, his stat line did take a hit against EDG as they put an end to Fnatic’s hopes of a 3-0 start. But even in the tough loss, Upset is optimistic heading into the second round robin.

“Even [against EDG] even though we were at such a large disadvantage from early game I think there were chances where the game could of swing so I guess I’m happy with how good we’re doing.” Upset said.

Many pegged Group A to be a two-team race between the defending world champions EDG and T1 but Fnatic have definitely inserted themselves into the conversation. With all three teams sitting atop the standings with 2-1 records a piece, every single remaining game matters that much more. With the group anyone’s up for grabs, Upset does have some predictions. Sorry C9 Upset doesn’t have the League Championship Series one seed a part of the equation.

“It’s hard to say right now but I would probably think it will be us and EDG,” Upset said. “But it’s so close I think any of the three teams can make it out definitely.”