"I just think we're good and that's it": Rogue Malrang talks going 3-0 in first half of Worlds 2022 group stage - Upcomer

“I just think we’re good and that’s it”: Rogue Malrang talks going 3-0 in first half of Worlds 2022 group stage 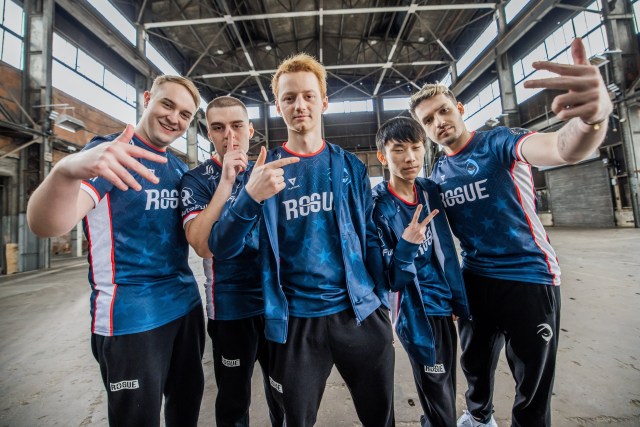 Rogue has defeated TOP Esports in their third game of the Worlds 2022 group stage, extending their winstreak to 3 games. The LEC first seed showed why they are the regional champions with a dominant late game against the LPL giants. With this win, Rogue sit at the top of Group B and improve their chances of making out of groups.

Rogue started the game on the back foot after a kill onto Comp in a 4v4 fight. However, they quickly regained control with an outplay in top lane from Andrei “Odoamne” Pascu. His Maokai first pick proved to be worth it as Rogue continued to extend their advantage in top lane and got another kiill there.

Trust is helping Rogue at Worlds 2022

Since their playoffs run, the confidence of the Rogue roster has increased as well as their trust in each other’s abilities. This was evident in today’s game where Rogue’s jungler Kim “Malrang” Geun-seong explained his decision to forfeit the Maokai.

“I was planning to play Maokai jungle and then my top lane said he wants it,” Malrang said in the post-game interview. “So, I just have to lock in Leesin and it turned out really well.”

Rogue enjoyed a dominant top side against GAM when their top laner was on Maokai and the same happened  today. Also, the Rakan engages from Adrian “Trymbi” Trybus also played a crucial part in taking objectives for Rogue. Malrang  also explained that he believed that they were just good so far.

A 3-0 start for the LEC champions

Rogue started the game on the backfoot after a kill onto Comp in a 4 versus fight. However, they quickly regained control with an outplay in top lane from Andrei “Odoamne” Pascu. His Maokai first pick proved to be worth it as Rogue continued to extend their advantage in top lane and got another kiill there.

Furthermore, TES wrestled back control of the game with a quick double kill onto Rogue’s bot lane and took down their first tower of the game. They pressed the advantage and also took down the mid lane tower. Things seemed to have swung in favor of TES but Rogue found a fight in the top lane to take down Zhuo “knight” Ding. They immediately turned this into a baron and knocked down TES inner towers.

Rogue amassed a 4,000 gold lead from the baron empowered minions and increased their pressure on the map. They continued to find picks onto several members of TES and eventually took down their base.

After defeating Top Esports in their third game of the group stage, Rogue sit at the top of Group B with a 3-0 record. Both Top Esports and DRX only have one wins but with DRX yet to play their third game, they could move to second place. Meanwhile, GAM Esports occupies fourth place as they are the only team in the group yet to get a win.