"I don't specifically think of me as a top player": T1's Zeus licks wounds after Fnatic defeat at Worlds 2022

“I don’t specifically think of me as a top player”: T1’s Zeus licks wounds after Fnatic defeat at Worlds 2022 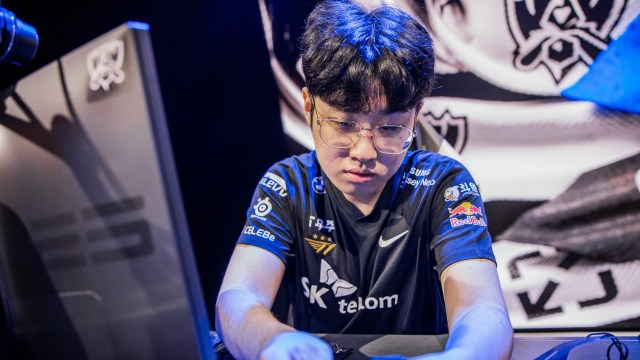 Provided by Riot Games/Getty Images/Lance Skundrich With all eyes on him, Zeus still thinks he has a lot to learn before anyone can call him or T1 the best.

After an incredible performance at the 2021 League of Legends European Championship, T1 decided to take a risk heading into 2022 by promoting their academy top laner Choi “Zeus” Woo-je instead of running it back with the roster that led them to a semi finals finish for the first time since 2019.

But in the 2022 spring split, the move turned out to be the correct one as T1 pulled off the first perfect season in LCK history and Zeus proved that not only was he one of the best top laners in the region, but the world. Even though T1 are at Worlds 2022, with Zeus being a major reason why, he doesn’t think he is on that level quiet yet — especially after T1’s loss to Fnatic at Worlds 2022.

“I don’t specifically think of me as a top player but I still have room for improvement,” Zeus said. “I’m trying my best to improve myself.”

The rookie top laner has improved quickly over his first year picking up back-to-back All-LCK top lane honors in spring and summer while also being named the best top laner at Worlds 2022 according to Upcomer. But even with that, he still thinks there are better players.

“I think every top laner plays well but I’d say Nuguri [is the player I look up to the most],” he said.

Specifically honing in on the top lane competition in T1’s group at Worlds 2022, Zeus has already sparred against two of the most well-known top laners in the world. on Day 1 he got the best of Edward Gaming’s reigning world champion top laner Li “Flandre” Xuanjun but on Day 2 he ran into problems against Fnatic’s Martin “Wunder” Hansen. Wunder in particular drew praise from Zeus as he said that Wunder was “really good”.

“I think I played a little too cocky or not in a humble way and Wunder reacted well to that,” Zeus said. “I will try my best to improve my play next time.”

Fnatic in general has impressed Zeus and it’s easy to see why. The League European Champion third seed currently sits atop the group A standings at 2-0 following T1’s loss to them on Day 2. Fnatic has been on fire since the start of the play-in stage where they only suffered a lone loss to Brazil’s LOUD as they cleanly made it into the group stage with a 4-1 record and are now 6-1 overall. But Zeus said that the group stage is far from over.

“Fnatic is doing way better than I expected but later in the stage we will never know what will happen,” Zeus said. “I personally think it’s going to go like how I expected before with T1 and EDG making it out.”