How to win MrBeast’s Extreme Survival Challenge in Fortnite - Upcomer

How to win MrBeast’s Extreme Survival Challenge in Fortnite

All the details players should know in advance 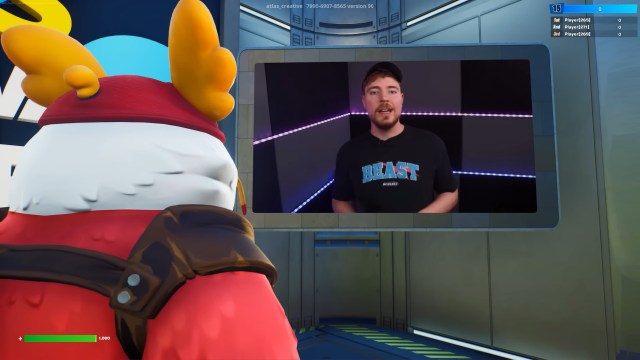 Screengrab provided by YouTube via EveryDay FN MrBeast himself talks players through the rules of the game before each round begins.

This weekend, the stakes will be higher than ever for many Fortnite players throughout the world during an online competition. Thanks to YouTube and philanthropist Jimmy “MrBeast” Donaldson, players will get to compete for a grand prize of $1 million.

Undoubtedly, MrBeast’s crossover with Fortnite will attract a large number of competitors. As a result, finishing in first place will be no easy feat. Here’s all the information players need to know about the event and how players can try to win MrBeast’s Extreme Survival Challenge in Fortnite.

Nope, it’s not clickbait! This is REALLY happening.@MrBeast in Fortnite.

Rules of the game

In order to win MrBeast’s Extreme Survival Challenge in Fortnite, players will need to achieve the highest Score in the world across their five highest-Scoring matches. Only the No. 1 player will earn the $1 million prize, so anyone aiming for the gold will have to bring their A game.

During the main portion of the challenge, players will have to dodge an onslaught of obstacles. Such obstacles include exploding bombs, lightning bolts and moving walls. Competitors may also be tasked with doing certain actions, like performing a dance emote, moving to a specific portion of the stage or sliding along the ground.

The next action the player has to perform will always appear on the screen right before the player has to do it. As a result, simply following instructions in this Simon Says-esque game will allow players to increase their Score.

In addition, there are minigames that will pop up during the match and take players away from the main stage. These minigames will similarly task players with completing a certain objective, such as jumping to the bottom of a pit without hitting any beams along the way.

How to win MrBeast’s Extreme Survival Challenge in Fortnite

Although the challenge itself won’t begin until noon ET on December 7, the island where it takes place is already available. As a result, anyone taking the event seriously can begin practicing now. Putting in several hours of practice in advance will undoubtedly make it more likely that a player will win MrBeast’s Extreme Survival Challenge.

In addition, players should look out for opportunities to earn extra points. For example, collecting coins over the course of the event will add an extra bonus to a player’s Score.

Finally, players should be sure not to fret over one bad performance. While the challenge itself lasts for three hours, only a player’s top five matches will affect their Score. As a result, a few off matches won’t necessarily ruin someone’s chances of winning the whole thing.