How to watch the TFT Dragonlands Western Last Chance Qualifier

How to watch the TFT Dragonlands Western Last Chance Qualifier 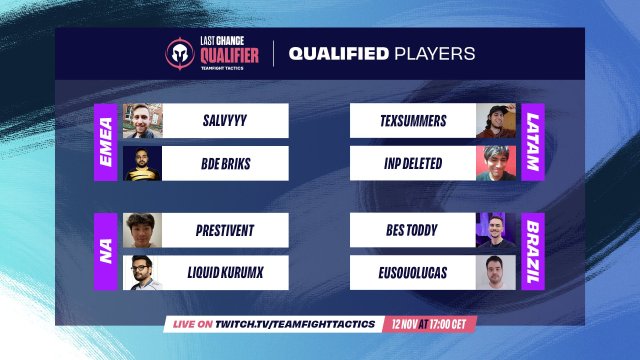 The final two spots at the Teamfight Tactics Dragonlands Championship are about to be determined. Two players from each of the four western regions will battle against each other to see who will join the 30 other players at this season’s world championship. Here is everything you need to know about the format, who is playing and how to watch.

What is LCQ? The Last Chance Qualifier is bringing eight of the best players in LATAM, Brazil, North America, and EMEA one last opportunity to qualify for the TFT Dragonlands Championship.

📺 Join us on 12th of November at 17:00 CET on https://t.co/yCnsPwITCn#TFTRisingLegends pic.twitter.com/wK3ePzGS82

The format for this event is very simple; the eight qualified players will be put into a single lobby to play a six-game series. At the end of each game, points will be distributed to each player based on their individual placement. The point structure is standard as it will award eight points for a first-place finish, seven points for a second-place finish and so on. At the end of the six-game series, the two players with the most accumulative points will move on to the TFT Dragonlands Championship. The other six will be eliminated.

At each regional final, the two highest performing players that did not automatically qualify for the TFT Dragonlands Championship have qualified for this Last Chance Qualifier. As a result, there are several high-profile players in attendance.

From Brazil comes the pair of Lucas “eusouolucas” Damaso and Luis Gustavo “Toddy” Hüttl; eusouolucas is coming off back-to-back world championship appearances while Toddy is fighting for his first.

And finally, there’s Latin America, bringing two relative unknowns in “TexSummers” and “JosueDeleted;” these two are expected to be the dark horses.

Yesterday's excitement is still in the air, and we rush to you with news about the next weekend! Check out this neat lineup:

The TFT Dragonlands Western LCQ will be streamed live on Saturday, November 12 starting at 11 a.m ET on the official TFT twitch account. The English broadcast will feature a six-person talent desk featuring some of TFT’s best bringing spectators the play-by-play and analysis. In addition to the English broadcast, there will be Latin American and Brazilian broadcasts too.